Where to celebrate Pride in London: 2019 dates, times and events

Pride month is upon us once more, bringing with it fabulously colourful outfits, bold make-up and most importantly, a celebration of diversity and LGBTQ+ rights on the streets of London. As is tradition, the festivities culminate with the Pride in London Parade (6 July), which last year saw over a million people take to the streets of central London to march or show their support.

This year, Pride in London marks 50 years since the Stonewall Uprising, the protests that kicked off the Pride movement when demonstrators took to the streets of Manhattan in protest against a police raid on the Stonewall Inn, a gay pub in Greenwich Village. As such, this year's Pride theme is Jubilee.

Whether you’re taking part in events as a member of the LGBTQ+ community or just want to know where to go to show your support, here’s where to catch the best of Pride in London 2019. 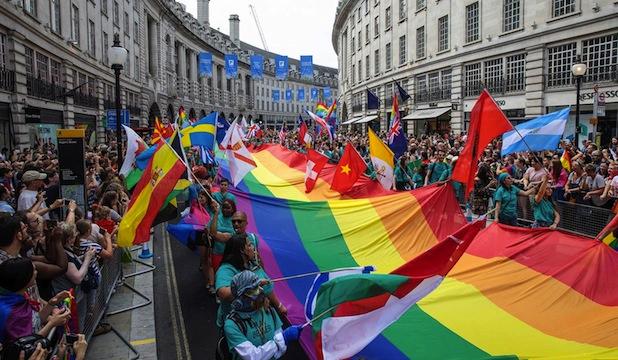 Cheer on the Pride in London Parade

Pack a rainbow flag, an abundance of glitter and plenty of good cheer: the Pride in London Parade is taking place on Saturday 6 July this year. One of the biggest Pride events in the world, the parade is likely to see over a million people turn out to march or wave at the passing floats.

We recommend watching the parade at Portland Place where the parade begins, Whitehall where it ends, or Oxford Circus, where you’ll get a great view of the action if you arrive early enough to bag a front row spot.