We talk to Romola Garai, star of the Young Vic's 'Measure for Measure' about working on Suffragette, living in a covent and sexist directors 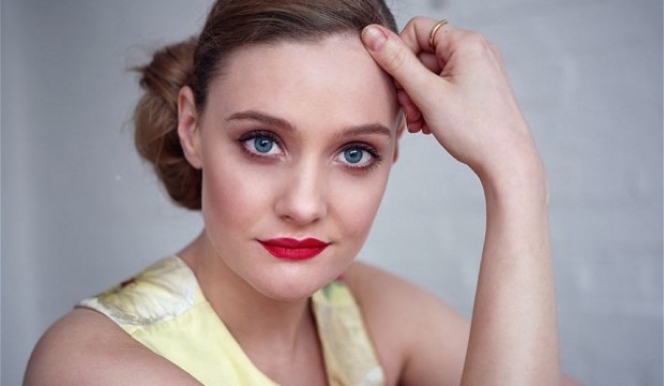 We Interview Romola Garai: 2015 star of Young Vic's Measure for Measure
It’s a lazy presumption that pretty, pale actresses who take a lot of period roles will simper, or pussyfoot. Or that they'll drape themselves in pretension, because they don’t have very much to say. English actress Romola Garai falls into neither camp.

The star of Atonement, The Hour, The Crimson Petal and the White and the 2015 Suffragette film is fantastically feminist. She recently talked about her post-partum vagina on stage at the BAFTAs (23 stitches). Playing a pregnant woman, she masturbated on stage at the Royal Court (Village Bike). She loves lamb chops and cheeseburgers. She swears like a sailor.

Garai is also a pretty fearsome interviewee, who corrects, chides and “strongly disagrees” with you, as you stammer a defence. Everything she says is well thought-through and fiercely argued. You end up really, really wanting her to like you.

Next week, four days before she is to appear in Suffragette film with Meryl Streep and Carey Mulligan, Garai begins her run as the virginal Isabella in Shakespeare’s Measure for Measure. The character divides opinion. Isabella is a novice nun, about to enter the Order of Saint Clare, who refuses to sleep with Duke Angelo in order to save her brother’s life, stating ‘More than our brother is our chastity’. 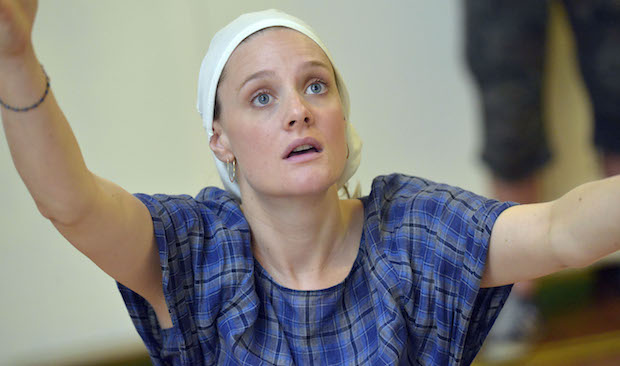 Romola Garai in rehearsal for Measure for Measure. Photo by Keith Pattison

“I don’t think it’s a problem of modernity”, says Garai. “It’s a problem of faith. A person of faith would understands her decision.” We should have much more respect for her character than we do, she argues. “She’s incredibly strong. It’s a very noble thing.”

In order to get her head around the Isabella, Garai lived in a convent of Poor Clares in Sussex. “I needed to know what it felt like, physically, to be a nun” she says, “how it looks, how it sounds.” And the nuns themselves? “Oh, they were very welcoming.”

Garai watched documentaries, read books; became obsessed with nuns. This headfirst, intellectual approach is typical: "Books and history are my way into a character. I start at the outside, with the big themes, and work my way in from there.”

Her academic interest in literature is one of the reasons we’ve seen her in so many period films: “In the Nineteenth Century, the question of womanhood dominated literature. Most of the great novels are about women struggling to find self-realisation.”

So period works, where women were a very long way from emancipation, don't compromise her views on feminism? “No. Absolutely not. In fact, I feel the exact opposite is true. George Eliot, Henry James and Jane Austen wrote many more - and much greater - parts for women.”

Contemporary writing has no interest in women, then? “Well, just look at the statistics, only 30% of parts are female. There’s this fear, which I don’t quite understand, that female parts alienate male audiences.”

If that’s the case, then her up coming film Suffragette is a major exception. Women, mercifully, dominate the proceedings. The film is directed by Sarah Gavron and Abi Morgan, who has made a career out of exploring womanhood, Meryl Streep, Helena Bonham-Carter and Carey Mulligan star.

Working on Suffragette was “amazing” Garai says; “It was an incredibly moving project to be part of. This film is about one of the most important moments in human history, suffrage for women, which has completely been ignored by cinema until now.”

In an industry with such a complex attitude towards women, Garai is brave to speak up and out against the misogyny she encounters. This candour, though, is limited to her discussion of her career. Pry at your peril: she is intensely private when it comes to her home life. So much so that one of her top Google searches is ‘Romola Garai babyname’- she gave birth two years ago and is yet to reveal the name of her child.

After half an hour, Romola breezes off back to her Measure for Measure rehearsal, having sacrificed her lunch hour to speak to us. You're left slightly punch-drunk. But, God, it'd be great if all actresses were like her.

Romola allowed us to peek inside her diary, though with the caveat "I never go out any more because I have a kid..."

London Oratory in Brompton. One of the most beautiful buildings I’ve ever been inside; a wonderful place to spend an afternoon.

From Notting Hill down the Hill towards Shepherd’s Bush. When all the plane trees are losing their leaves it looks like it’s snowing

Greatest meal you’ve had in London?

A meal at Duck Soup on Dean Street. I had a lamb chop with boiled new potatoes and beans. It was one of the most delicious meals ever.

Polly Stenham’s play That Face at the Royal Court. I saw it twice and both times I was crying so much that the people near me told me to be quiet.

There’s a really amazing falafel place on the Uxbridge road called Naama, which does the most incredible falafel wraps.

The Gate in Notting Hill to see a movie and then have Greek food at Mazi‘s afterwards.