REVIEW: This intense, electrifying indie blows all others out of the water: hands down the best film of 2015 so far. 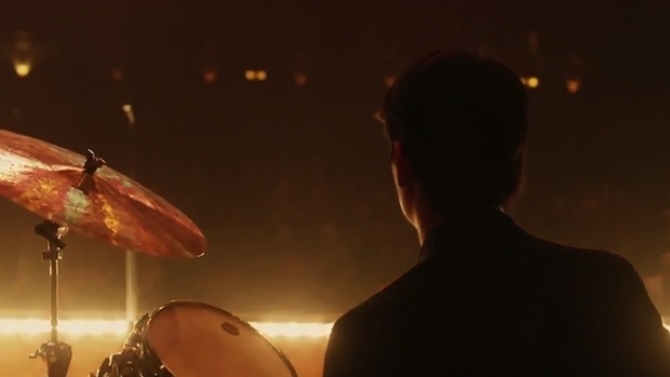 Winning the Grand Jury Prize at last year's Sundance and being treated to a standing ovation at Cannes wasn't a bad reception for a film that last year was facing an altogether colder side of the industry – the side with no funding. But writer/director Damien Chazelle scraped together enough to produce his concept as a short, subsequently winning Sundance's Short Film Jury award. On the back of this success comes the fully realised feature length version of Whiplash, the story of Andrew Neyman, a young aspiring Jazz musician who will stop at nothing to achieve greatness – in a film that achieves exactly that.

As in Darren Aronofsky's Black Swan and The Wrestler, the hero's quest for artistic perfection is dramatised by the relationship between student and mentor. And, like its predecessors, the dynamic between Neyman and his violent, self-mythologizing teacher, Fletcher, isn't exactly nurturing. But where Aronofsky's work lapsed into melodrama, Whiplash sizzles with spontaneity and an authentically inglorious intensity.

It's here that we come to the film's fiercely congratulated star, ferocious new talent Miles Teller: Teller's debut alongside Nicole Kidman in psychological drama Rabbit Hole saw him hit the ground running, and he recently starred in fellow in another Sundance hit The Spectacular Now. Whiplash could be no better showcase for Teller's talents, who was described by Chazelle as exhibiting a 'vulnerability and a rawness that most young actors don't'.

The film was aided by the fact that Teller was a keen drummer since the age of 15 – albeit at a church youth group – and we're told that Teller performed the majority of the frantic, intricate drumming all by himself – impressive indeed for a film that paints so intimate a picture of self-discipline and raw talent. Chazelle is said to have allowed takes to far overrun their necessary length to exhaust his young star, that he might evoke the same passionate devotion that spurs on the lead character to sacrifice his relationships and even his happiness, for his art. Where other films might have attempted a safer moralising message, leaving the implication that true happiness lies not in success but in human relationships, Whiplash's hero makes no apologies for his art.

Hammering the fear of failure into Neyman is the Nazi-esque music maestro Terence Fletcher, played by J.K Simmons. Instantly recognisable from his popular comedic turns (notably as Ellen Page's father in Juno), Simmons' performance as Fletcher makes him now unforgettable. He is grandiose to the extreme, but where another actor might have played Fletcher as supremely monstrous, Simmons isn't afraid to subvert the character's terror with comedic nuances.

Chazelle explained how he approached filming the musical scenes as he would have shot an action scene: by intricately mapping the camera movements and angles alongside the score. In this way, the camera 'provides the kineticism', and a concert scene packs the same adrenaline punches as a bank robbery – a feat that Chazelle manages with aplomb. The camera shifts and shakes according to Neyman's mood – as does the score – with a tension that builds continually throughout. The characters well-crafted, human and flawed; the score so powerful it leaves you desperate to head straight to your nearest jazz club; and the combined talents of director and stars make Whiplash an exhilarating, original film not to be missed – prepare to be glued to your seat.