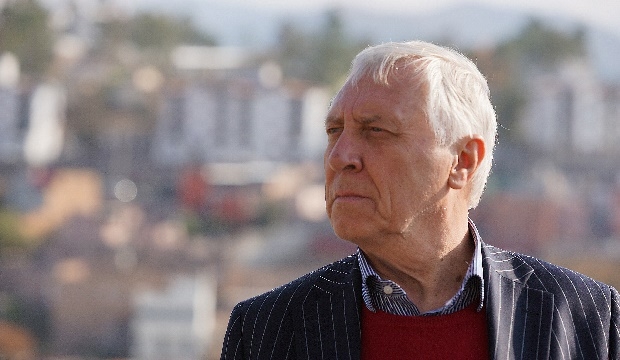 Peter Greenaway, Photograph: Axiom
Peter Greenaway does not make films like most directors; his is a cinema with a strong sense of staging and theatricality, full of editorial wizardry, and literary verve. He’s not in the business of making blockbusters; more at homes with experimental takes on Shakespeare (Prospero’s Library) or artful depictions of debauchery (The Cook, The Thief, His Wife & Her Lover). The lives of artists also feature heavily in work, with previous character studies including Mozart and the Dutch printer Hendrik Goltzius.

His newest film Eisenstein in Guanajuato is the story of the Soviet director Sergei Eisenstein’s sojourn to Mexico. The titan of Russian cinema headed to Central America in 1930, shooting for a film called ¡Que viva México! (which never saw the light of day.) Rather than focusing on the cinematic project, Greenaway hones in on the director’s relationship with Palomino Cañedo, a young anthropologist, with whom Eisenstein falls passionately in love and is able to embrace his homosexuality.

It’s rare to see a film so energetic. This is cinema in overdrive; the screen regularly splits into triptychs and Greenaway’s shots are inter-spliced with scenes from Eisenstein’s own films. But it’s Elmer Bäck who really adrenalizes the film; ebullient doesn’t even cover it. Wild-haired and wide-eyed, he triumphs in the title role.

We caught up with Peter just before his BAFTA retrospective to talk about a film which he considers ‘an attempt to encapsulate an extraordinary man who I believe is probably the greatest filmmaker we’ve had in a hundred and twenty years.’

Elmer’s is a very theatrical performance. Do you know if this is what he was like?

I think there is a rather po-faced [image], certainly within Russia where they obviously regard Eisenstein as a national treasure: him being a rather stern and sombre mega-intellectual. But you’ve only got to read his correspondence and read his various biographies to see he was fun-loving; he was very, very articulate…He had an enormous cultural understanding, an inveterate reader all his life, and there’s every evidence that he was the guy who broke the ice at parties; he was the centre of attention and he commanded it. Whether talking to proletariat or aristocrats or politicians or whoever, he had that command. I was always convinced we should try and portray him like that.

Was it difficult to coax that performance out of Elmer?

The difficulty, really, was simply the casting. I mean, look at my problems; first of all, I make great play of the age, thirty three. The death of Christ and Alexander, who really are the same man (unfortunately, Christ came with a kiss and not a sword, a great mistake), and then there’s the idea that Saint Augustine said we all go to Heaven aged thirty three. And I think by the time you’re thirty three, you better have decided what you want to do with yourself. Otherwise it’s going to be too late. So it’s important we have an actor round about that age. That limits the situation somewhat. Then there are many photographs and loads of films about the man. We know his character: large head, short body, long arms, big feet, and a lot of hair.

We did enormous amounts of casting. I went to Saint Petersburg, Moscow, all over Europe, the east coast of America, and the west coast of America…And I was beginning to despair, starting to really irritate my producer, saying we’re never going to be able to make this film because I can’t find the person I want. And then I saw a minor Finnish TV series – saw it again, completely by accident, and saw Elmer Bäck, and had some hunch that he could do it. He’s Finnish so he speaks with a somewhat Russian accent. That’s never going to convince a Russian in Vladivostok, but there’s a chance that I could convince Californians and maybe English people.

So I took a risk, but my producers wanted to use, heaven forbid, an A-List Californian actor but that would never have worked. The manager and the agents would have stopped me. Full frontal nudity. Stay away from that. Far too dangerous. You know, jokingly Elmer Bäck said ‘What do you want?’ and I said ‘I need your body, your mind, your imagination, and your prick.’ And he said ‘OK, you’ve got it.'

It was very funny afterwards, he came up to me and said ‘I’m so happy to have done this. I’d never ever, ever thought that I could ever appear in a film where I’d be talking to my prick.’ There’s an element of exhibitionism of course with all actors, but you know he had to pull all the stops out. He did it very well.

There are lots of lengthy monologues in the film. How did Elmer prepare for those?

Well, we all piled into a hotel in Guanajuato – we shot the whole film, apart from two days, in Guanajuato. You know, he spent his nights getting to know the dialogue extremely well. And I think the way he performs, he’s not remembering it; it’s something coming out of him as if he himself had instigated it. And again, that’s what’s so convincing.

How much of what we see on screen really happened in Eisenstein’s life?

If you’re asking, did I invent the whole homosexual thing? No. We have all the correspondence. I turned it into telephone conversations because for me, it’s more lively than watching people write, although that can be done very excitingly. He had this relationship with Pera Atasheva, his secretary back in Moscow, who was in love with him. There was no chance at all that it would ever happen but they had a very, very close relationship. He says somewhere that she wiped his backside. Well, that’s a metaphor but it does indicate the intimacy which these two people had. They totally confided in one another, and he wrote long, long letters because often he was very lonely in Hollywood and very lonely in Mexico. He had these two guys with him, I think Alexandrov was, I don’t know, not really so very bright, and Tisse was always silent so I can’t imagine they were very articulate, veracious conversationalists. There were other Russians around, of course, but I think he was lonely and isolated and he wrote this correspondence.

More specifically, how much of what Eisenstein says in the film are his own words?

Did you ‘quote’ from Eisenstein in a more metaphorical sense too?

If you’re an Eisenstein pupil, you’ll know a lot of time he lit from the floor. We’re always lighting from the floor. There’s the way he stops the narrative to give you portraits; we’ve done that. There are many characteristics like this. He often eschews the idea of actually moving the camera. That might have something to do with the primitiveness of 1930s filmmaking vocabulary but there is a stasis to a lot of his construction so obviously I looked very closely at all the movies and tried to make those sorts of imitations. We also introduced modern techniques which is something that he’d have thoroughly gloried in.

What’s next for you?

I’ve written two more scripts; one Eisenstein in Hollywood, one Eisenstein at a film festival in Switzerland. A place called La Sarraz where he argues is cinema art or commerce. Of course, he argues that extremely well. We use a lot of verbatim dialogue because a lot if was recorded. And then of course the total failure that happened when he went to Hollywood.

At the present moment, I’m making a film about Brancusi, the sculptor, who in 1906 walked (it’s like a walking road movie) all the way from Bucharest to Paris. No point being a sculptor in Romania in 1906, nothing’s happening there at all. Everything’s happening in Paris. He was so dirt poor, he had to walk; couldn’t even afford the train fare. So our film is about this year and a half.