Banksy reveals a new mural in Dover, Kent which depicts a workman chiseling away at a star on the EU flag 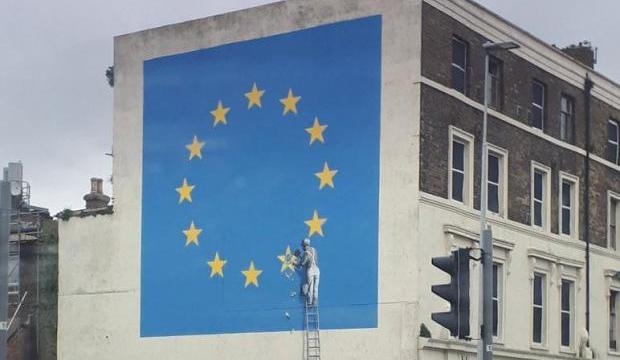 Banksy's mural on Brexit (Image via The Independent)
We’re not sure about you, but we’ve been waiting for Banksy to make a comment regarding the increasingly controversial, much-talked about decision our nation made to leave the EU. And here we have it. Better yet, we had it on the day that Emmanuel Marcon, the ferociously pro-EU candidate, won France’s Presidential election.

Over the weekend, a three-storey Brexit-inspired mural depicting a monochrome workman chiseling away at a star on the EU flag has appeared in the quaint town of Dover, Kent – uncoincidentally, one of Britain's main gateways to Europe.

During a time when tense pre-negotiation discussions regarding Brexit have been taking place, this mural (which many have criticized for arriving a few months too late) is in, our opinion, more timely than ever.

Thought provoking? We think yes – especially because the circle of stars on the EU flag represent the unity.