Director Yaël Farber makes her Donmar debut with an atmosphere and intense revival of David Harrower's play about a miller, a ploughman and the ploughman's wife

The three-person play tells the story of a Ploughman, Pony William, and his unnamed wife in a pre-industrial, puritanical village. The Ploughman (played with steeliness by Christian Cooke) is a grunting, muscle-bound workman whose long, secretive hours spent in the stables is the source of village gossip. 'Horses you want to be with not me,' his young wife (Judith Roddy) deplores, powerlessly.

TRY CULTURE WHISPER
Receive free tickets & insider tips to unlock the best of London — direct to your inbox
The language is at once basic – monosyllables, simply structured sentences, grunts – and searingly poetic. Off-kilter syntax and crude similes shape the couple's attempts to name the things around them and their speech has the rhythmic insistence of contemporary verse.

As the young wife strives to know the name for everything in God's world, she sees not just the mud and the water but the way light makes reflections and the feeling of the wind in the trees. Roddy animates these monologues with aching tenderness. 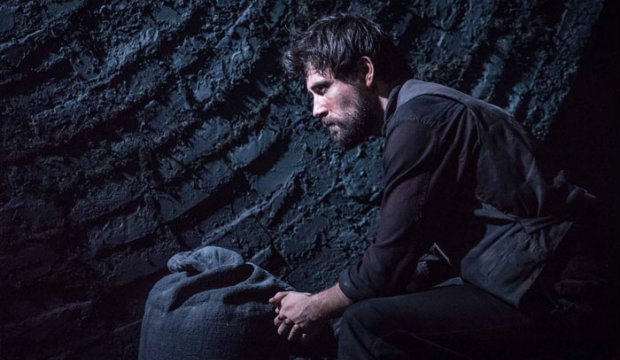 The balance of power shifts irrevocably when she is forced to go alone to meet the Miller (Matt Ryan). Resentment over his legal right to take a cut of everyone's grain combined with the mysterious death of his wife and child make the Miller a village misfit. He spends lonely evenings writing – expressing what's in his head. In a society shaped by illiteracy and manual labour it's an astonishing past-time.

Suddenly the young woman's urge to give things names, to look closely at the world and find words with which to comprehend its shifting beauty, is crystallised in pen and ink. But as she learns the names objects, she begins to give identity to emotions, to recognise the unspoken, unexplored fear, betrayal and rage in her marriage.

The story that ensues is a tense love triangle, a study of the power of language and a portrait of awakening consciousness. Dislocated from any particular time, with plain black garments and a murkily lit muddy stage, the play feels like a fable. A vast, black millstone rolls across the back of the set, looming ominously over the drama and punctuating dialogue with the harsh sound of scraping stone.

The philosophical impact of language and the visceral force of violence combine to thrilling effect. Knives in Hens is not easy entertainment, but it's an intelligent and disquieting 90 minutes.