To limit the spread of Covid-19, all UK theatres have been closed until further notice. Those due to attend an event will be contacted by the ticket provider.

Billionaire Claire Zachanassia has returned to her fateful hometown of Slurry, New York, after making her fortune, marrying seven times, and losing both her legs and a hand in bizarre travelling accidents. She has come with the express purpose to annihilate her first love Alfred Ill, who spurned her as a poor pregnant teenager 45 long years ago. But she doesn’t want to kill him with her bare hands; she wants the townspeople of Slurry to do it for her. And she is willing to pay big.

Friedrich Dürrenmatt's 1956 drama is fertile ground for drama in a new adaptation by Tony Kushner. But difficulties arise as soon as we meet the relentless dynamo that is Claire, played by Manville with hypnotising precision. She is master of ceremonies here and no one is going to stop her force of will. Is it a delight to watch the inevitable play out? At times, yes, due to the ornate performances given, including from The Matrix’s Hugo Weaving as the tight-lipped Alfred and Sara Kestelman as the incisive High School Covington. But overall there is distinct lack of surprise in the narrative.

There is an eerie sense of dislocation in the dejected town of Slurry. But instead of feeling relatable and ominous, it feels otherworldly and obtuse, like nothing that happens there really matters. Secondary characters are ill define; even Alfred at points feels limply written. The distilled, highly wrought character of Claire is where the writerly focus lies, but even then we are unsure how she went from poverty stricken prostitute to becoming the richest women in America. 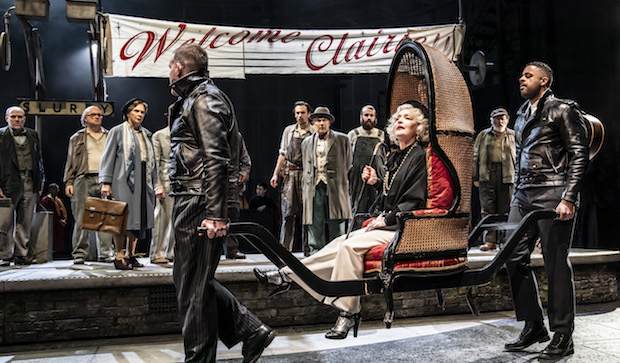 Writer Tony Kushner’s reputation precedes him. The Angels in America writer is renowned for his highly intellectual, elegant and eloquent dialogue that reaches deep into the nuances of the human condition, especially when love and loss is concerned. However, like much of his work, here there is indulgence: when one articulate sentence will do, he writes ten.

Dürrenmatt's original tragicomedy was an amalgamation of theatre of the absurd and classical Greek tragedy and comedy. This combination of the grotesque and expressionism are honoured by director Jeremy Herrin’s inherently slick production. Opulence abounds with a gratuitously large cast, dapper costume design from Moritz Junge and lavish use of levels in the set design from Vicki Mortimer.

At a whooping 3.5 hours, this spectacular production can feel like it collapses under its own weight. The core performances from Manville and Weaving are the glue that holds the piece in tact. There is a delicate scene in the pinewood forest of their youth, where Claire describes her lover Alfred’s fate, proving you do not need bells and whistles to fill the Olivier stage, just fully immersive drama. Kushner is more than capable of achieving this, and does at several significant moments, but it’s not enough to keep this drawn-out show captivating from beginning to end.