Extended run: the voyages of Charles Darwin come to life in a new theatre at the Natural History Museum

The Jerwood Gallery of the South Kensington Museum will be transformed into a 375-seat theatre, created especially for the production. The Wider Earth tells the fateful tale of Charles Darwin's five-year voyage on the HMS Beagle. Audiences will follow as the young scientist embarks upon a journey that leads him to alter our entire understanding of the natural world. As Darwin ventures from the heights of the Andes to the depth of the Amazon, science and faith collide.

A cast of seven actors and 30 puppets bring to life the creatures and adventures that prompted Darwin to make the connection between different species and the concept of natural selection and evolution. 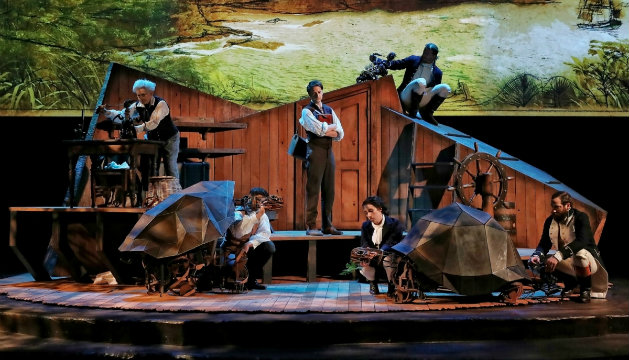 Theatre company The Dead Puppet Society, who specialise in merging traditional puppetry and cutting-edge technology, lovingly craft and animate models ranging from ancient Galapagos tortoises and mighty whales to the tiniest longhorn beetles. A specially-composed score by music producer Tony Buchen and Australian composer Lior combines with animations and projections to bring the voyage to life.

Writer David Morton originally developed The Wider Earth in 2014. Since then it has impressed audiences in South Africa, New York and Australia. The London premiere promises to be especially atmospheric, as our largest collection of natural artifacts provides a fitting backdrop to this story of profound discovery.

'It makes perfect sense for the museum to host this production which is a gripping retelling of one of the most important voyages in scientific history,' says Clare Matterson, director of the London production. 'During this expedition, Charles Darwin collected the specimens that would inspire his theory of evolution and change how we understand the world – specimens we still house at the Museum'.

Book now to transport the whole family back in time and all around the world.