Erin Doherty is compelling in Lyndsey Turner’s revival of The Crucible at the National Theatre, but ES Devlin’s design steals the show

The Crucible, National Theatre review 4 The Crucible, National Theatre review Holly CW
When people think of Arthur Miller's 1953 classic about the witch-hunts in Salem, Massachusetts, there’s one dominant scene that comes to mind: hysterical girls – ‘all marvellous pretenders’ – convulsing, fainting and chanting in unison, as if possessed by the devil.

In director Lyndsey Turner’s (Under Milk Wood, Top Girls) production at the National Theatre, the first major revival of The Crucible seen on the London stage in years, this well-known courtroom scene is quite the vision. Designer ES Devlin’s atmospheric set – where a sheet of thunderous rain intermittently curtains the action and characters are enveloped by a pitch-black void at the back of the stage – divides the courtroom into two halves, juxtaposing the girls, dressed in costume designer Catherine Faye’s pink, frilly pinafores, with the town’s working men, dressed all in blue. It’s a gender-normed illustration of the historic backbone to Miller’s story; despite their innocent appearances, these previously powerless girls led Salem’s 17th-century witch-hunts and defamed their elders – in some cases, with fatal consequences. 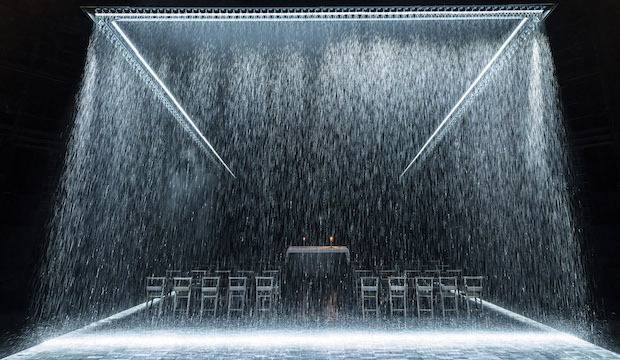 The Crucible at the National Theatre. Photo: Johan Persson

However, Turner’s faithful and at times drawn-out (at just under three hours) production is a reminder the town’s hysteria didn’t stem from the girls, who were in fact the fresh-faced products of their elders’ superstitions and pre-enlightenment reliance on religion over reason. She absents them from the stage for large chunks of the show while the proprietors of church and state argue over the sentencing of those charged, or positions them looming, pack-like in the background, where they join an ensemble chanting the sort of harmonies they would have learned in the church choir.

Present for the most part, though, is ringleader and mischief-maker Abigail Williams (The Crown’s Erin Doherty, bringing an unusual but compelling nervous, wretched energy to the role). On witnessing the dreadful power the word ‘witchcraft’ has over the town’s adults, she rallies her contemporaries, kicking off the long list of accusations that leave the accused with a terrible conundrum: to falsely admit to fraternising with the devil to save their lives, or deny claims and hang for their so-called sins. 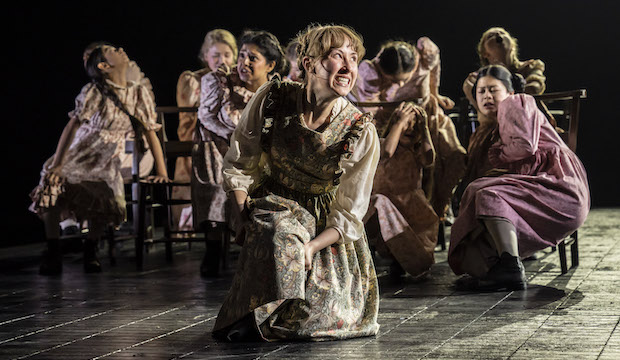 The accused John Proctor is the story’s voice of reason, his servant Mary Warren the attempted whistleblower, through whom we see just how easy it is to be swept up by mass hysteria. After Doherty, they’re two of the production’s strongest performances, coming from a gruff, no-nonsense Brendan Cowell (Yerma), who excels in his character’s ‘my name!’ speech, and a wide-eyed, hand-wringing Rachelle Diedericks, respectively. Eileen Walsh as Elizabeth Proctor is also noteworthy, playing the wronged wife with naturalistic dignity. 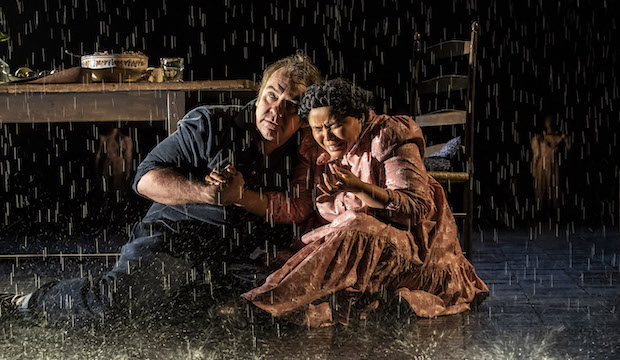 Beyond these leads, some accents are a little all over the place, though this may be a stylistic decision – acknowledging the mix of European settlers in Massachusetts only decades before.

While the programme notes point out that we still witch-hunt outsiders today, usually without such dire consequences, Turner’s production is very much a period piece. While visually spectacular, it's strait-laced and loyal to Miller’s text, ideal for the numerous school groups likely to trickle in over the course of its seven-week run. The Crucible is a favourite on the school syllabus, but rarely seen on the London stage. Here, it's revived as a thing of beauty.