Playwright Simon Stephens (Curious Incident of the Dog in the Nighttime, Carmen Disruption) premieres not a play, but 'A series of suggestions for a piece of theatre'.

Instead of the dialogue, monologues and stage directions of a standard script he has written words that 'may be spoken by the performers but none of them need to be'. Director Imogen Knight, who has worked extensively as a movement director, punctuates these words with physical theatre, spanning balletic spins and jerky thrusts.

And so you are warned: Nuclear War is not so much a play but a fusion of sound, light, movement, recording and verse, brought together to give form to subconscious thoughts.

For 45 minutes we watch one nameless woman and a chorus of four go about the ordinary business of waking, travelling on the tube, sitting in a cafe and walking down a high street. But these banal actions are accented by dance, chants and inner thoughts, conveyed via pre-recorded monologues. The rhythmic, repetitive and sometimes staccato verse slips between intimate memories and transcendental truths, culminating in an overall search for connection.

The violence of the title is, we can only assume, a metaphor for the private, unseen apocalypse of loneliness and ageing. And while the innovative form steers you towards a sense of the subconscious, Nuclear War doesn't quite devastate. In all the boldness, it's the pure force of human emotion that gets lost.

Click here to find out more about the Royal Court 2017 Season. 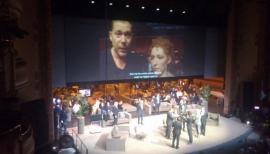