Pitched as 'The Silence of the Lambs meets Black Mirror', the show presents its audience with a gruesome case of multiple murders and cannibalism. It asks them to decide whether the accused party, Dr Clarence Lassiter (Peter Picton), is guilty or innocent. But there’s a second question bubbling under the surface: will justice prevail over sensationalism, hype and show? 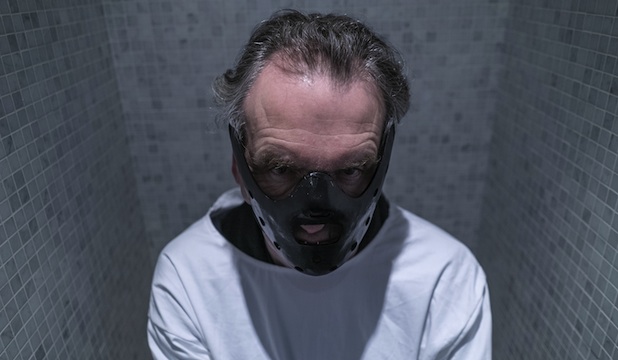 The show takes place in a secret east London location. Audiences are led first into a hall-cum-bar area where actors are roaming, sharing titbits from their side of the story with whoever will listen. At the back of the space is the crime scene, a makeshift hotel suite, semi-coloured in with all the details you’d expect to find: a white-washed bathroom and bedroom, wardrobe and locker. Certain items smeared with blood and cordoned off with police tape. It’s a tight space and you’ll have to shoulder your way through the crowd to get a peek at the evidence.

Back by the bar and beginning to wonder where this is all going, we’re eventually gathered together by Trial TV presenter RIP Love (Monty Jones), who addresses the crowd like a real studio audience while directing the camera crew on how best to capture the action. We’re taken through the evidence by Detective Chief Inspector Benson (Ged Forrest) and his team before being led through to the venue’s genuine Grade II listed Council Chamber – every bit a proper courtroom in appearance – where the trial (and body of the play’s action) takes place.

The impressive setting and drink-while-you-watch approach is the pull with Secret Theatre Project London. While the cast are generally strong and hot-on-their-feet with improvising, the show’s plot and script are patchy in places, occasionally losing us (and the Defence) when courtroom-deep in the details. We, the audience, spend a fun 10 minutes debating on the outcome of the case – and presumably there’s a second ending prepared had we swung our vote the other way. But once all is wrapped up, there’s a further twist. Then two more minor twists after that, which feel like overkill on top of what was already a decent enough conclusion.

That said, the show’s setting – a time in the near future when the media presides over the court – is cleverly portrayed and all the more spine-chilling for seeming frighteningly plausible.