Why read the script? Harry Potter and the Cursed Child review — no spoilers

SPOILER FREE REVIEW: our five point guide to getting the most out of Harry Potter and the Cursed Child script. Is it as good as going seeing the play? 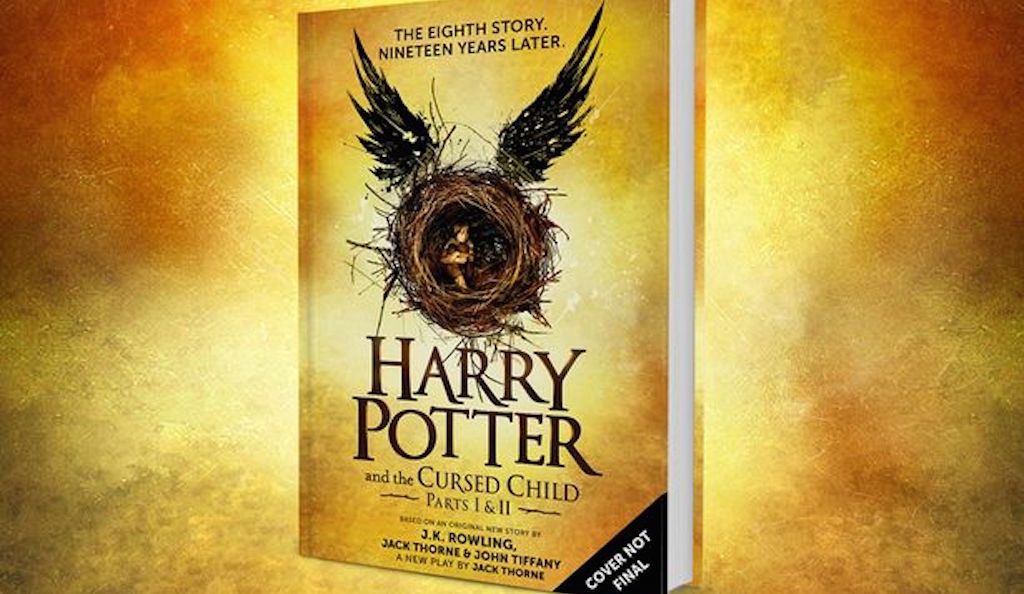 Harry Potter and the Cursed Child script review
Time-turners at the ready: it's 2007 all over again. Witches and wizards from across the country, dressed in their make-shift invisibility cloaks, crooked glasses and lightening shaped scars, have waited up all night outside of bookshops to get their hands on the latest Harry Potter instalment.

TRY CULTURE WHISPER
Receive free tickets & insider tips to unlock the best of London — direct to your inbox
Except this time, nine years after the publication of Harry Potter and the Deathly Hallows, the next chapter in the Potter universe hasn't been presented to us as a freshly bound novel hot out of the hands of J.K. Rowling, but as a script of a play now on in the West End co-authored by Rowling and playwright Jack Thorne.

Harry Potter and the Cursed Child parts one and two script: REVIEW.
Even the most half-hearted Potter fan will know that Harry Potter and the Cursed Child picks up where Rowling last left Harry, Ron and Hermione: 19 years after our three heroes defeated Lord Voldemort, on platform 9 and 3/4 at Kings Cross, kissing goodbye to their gaggle of children on their first day of Hogwarts School of Witchcraft and Wizardry.

Hardcore Potter fans will even recognise some of dialogue from the last book (and film) on the first two pages of the script: "Albus Severus," says Harry, "you were named after two headmasters of Hogwarts. One of them was a Slytherin and he was probably the bravest man I ever knew."

And then that's it. All that we have ever known about the Potter world is left behind, as a new generation of witches and wizards step forward to carry on the story. This time, the spotlight is on Harry Potter's youngest son, Albus Severus Potter, who enters his first year of Hogwarts burdened with the weight of his father's legacy and a Potter past that refuses to stay put.

So is it worth reading the script? J.K. Rowling herself once said that Harry Potter and the Cursed Child needed to be a play, rather than a book, to give full life to her creative vision. Many of the play's reviewers were impressed by the staging and tricks that brought the magic to life before the audience's eyes. No script is ever going to be able to offer those things. Indeed, anyone who reads script before seeing the play will find their brows twisted in disbelief at some of the stage directions and wonder how on earth such a thing would be possible: polyjuice potion without CGI? You must be joking.

But, the real wonder of Harry Potter was never the magic. It is plot, delightful details, and, most importantly, the people: basic, raw, brave, cowardly, good, evil and a tiny bit bonkers as they are. And all of that can be found in the script with a indisputable J.K. Rowling tone of voice that brings back the cast of characters to life again. And all that can be found in the script. Here's our five point guide to making the most of it:

How to read Harry Potter and the Cursed Child, the script.
Swat up on who's who and what's what

If that still sounds like more time then you have to give (they're big books after all) start by re-reading or re-watch the end of Part 2 Harry Potter and the Deathly Hallow, 19 years later. And keep this family tree (by Rowling herself) close at hand to help you remember who the important characters are... 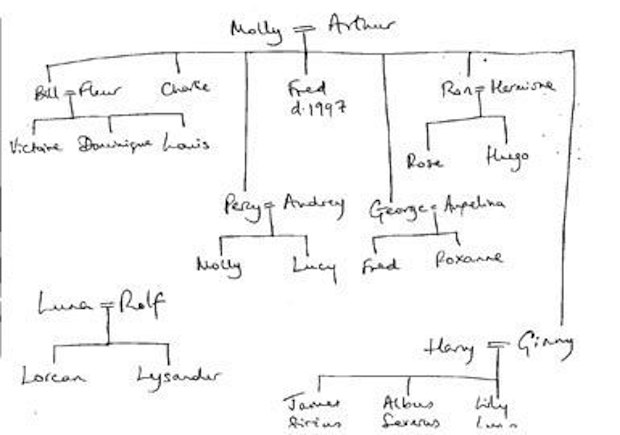 This is not a novel, this is a script, so obviously there are no physical character descriptions to be found — and why would there be? The audience is looking at the character in the flesh. For those at home with the script and not West End actors, have a look at some of the pictures from from the play to help you imagine exactly what this universe and all the characters - especially the new generation of children - look like. 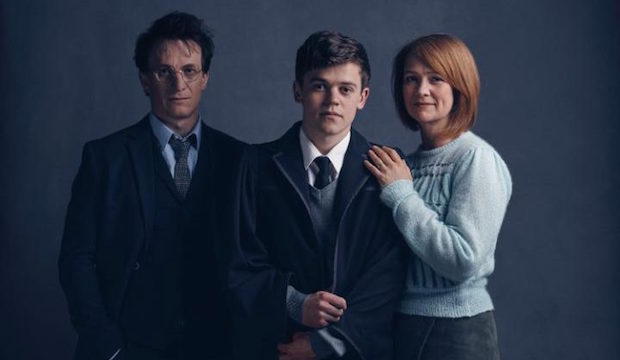 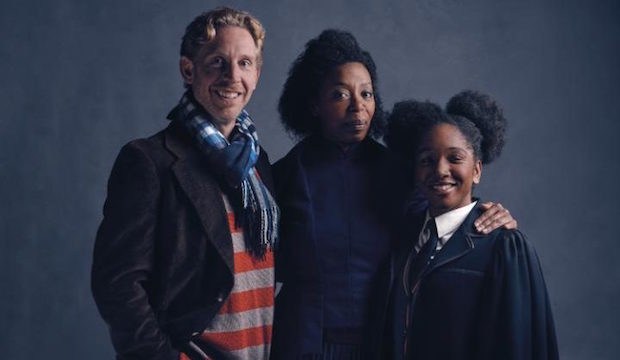 Ron, Hermione and their daughter Rose 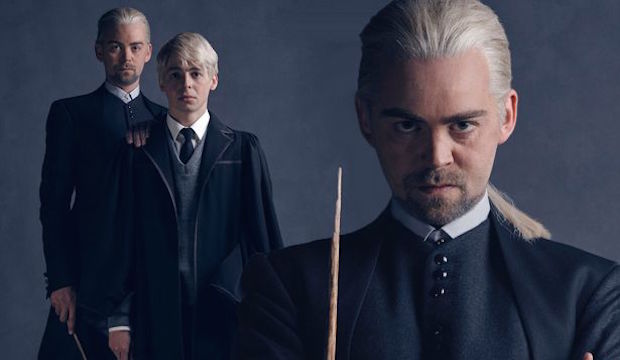 Draco Malfoy and his son Sorpius 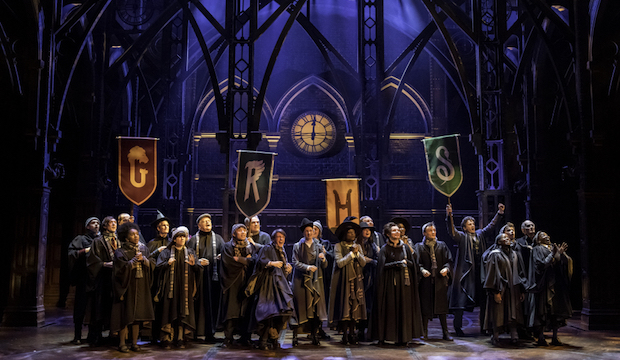 The set, and many of the Hogwarts cast

Rowling was sometimes criticised for her over-eager use of adjectives in the Harry Potter books. Well, I bet those people are feeling sheepish now. Without anyone to tell us HOW the lines should be said, and what exactly might be going on in Harry Potter's head, the best way we can think of to bring feeling back to the words is to find a friend (or two) and act out the lines out together and imagine yourselves into the role. Get yourselves a wand from the Harry Potter shop in Kings Cross station - and maybe a safe space where no one else can see you - and become the Boy Who Lived for one night only.
Take your time

Remember that a script is designed to be read aloud, with pacing, action, movements and the kind of contemplative moments that happen when talking in real life. Even the hungriest Potter fans, desperate to gobble down the next Potter instalment as quickly as possible, were prevented from digesting the whole of each book too quickly by its shear size. But a script isn't like that: its only dialogue and you could get through the whole thing in a couple of hours if you had your heart set on it. Don't. Read it slowly, imagine how the characters look (see above) and feel in every scene and with every line. Conjure up the sets and the magic in your own mind, and relish every word before moving onto the next. This is likely to be the very last you see of Harry Potter after all, as J.K. Rowling told the Radio Times: He "goes on a very big journey during these two plays and then, yeah, I think we're done." So make the most of it.

Buy tickets to see the play

We love the script, as an exceptional second option for anyone who was unable to get their hands on tickets to the play itself. But to really get the most of the potter universe, get ready this Thursday 10am to book yourself tickets to see the play to get the full experience. After all, it's how Rowling designed it to be.

Harry Potter and the Cursed Child