19 CW readers are interested
Pity, Royal Court Theatre review 3 Pity, Royal Court Theatre review Intern Culturewhisper
Feather-ruffling playwright Rory Mullarkey is back with a new play Pity, in which what begins as a dull and average day for protagonist Person (Abraham Popoola) spirals into an absurd and surreal adventure. Staged at the Royal Court and directed by JMK Award-winner Sam Pritchard, this happily logic-less play from Mullarkey offers a bit of escapism amid the real world’s challenging political climate.

Pity begins with Person, an unemployed young man, setting out to enjoy a day of watching the world go by in his small, uneventful town. But before long Person’s beige day unravels into bizarre chaos, as lightning strikes, wedding bells ring, bombs explode and the country descends into a civil war. 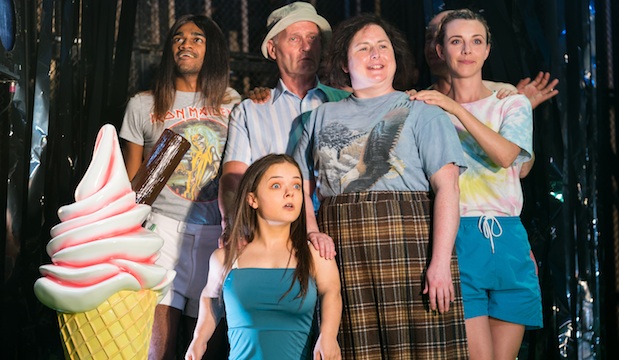 Over the course of Person’s adventure, together with his companion Daughter (Sophia Di Martino), he’s confronted by a ream of self-obsessed characters – reminiscent of those encountered in Lewis Carroll’s Alice books – who deliver self-pitying, often nonsensical monologues and attempt to engage in irrational, flighty conversation.

The cast are quick to jump between roles and we meet a camply dressed sniper, pirouetting soldiers, warlords, refugees and a snobby professor along the way. Even in death, these characters are reluctant to give up the spotlight, enjoying the moment as they make their slow and purposeful exit from the stage, looking directly at the audience as if sharing in the moment with them.

'I’m interested in the idea of how life might unfold if it was like how it was on your phone and you just scroll through a massive parade of disaster,' said Mullarkey in an interview with Time Out. This neatly sums up the jumble of events that unfold in Pity and the uncaring reactions of Mullarkey's characters who, by example, eat ice cream over the recently deceased bodies of their companions. Person and Daughter are just as self-involved as the rest of the play’s characters, calling out ‘I’m okay’ each time disaster strikes, rather than asking after the other’s wellbeing. 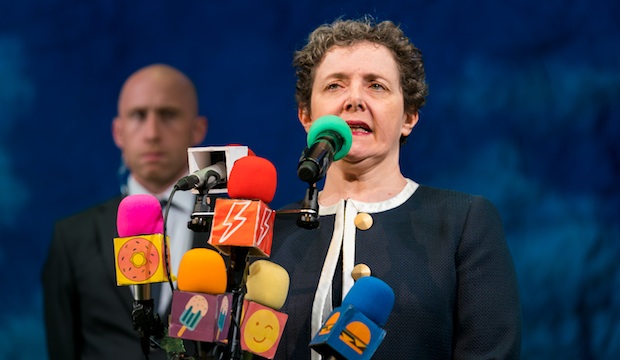 All stops have been pulled out to make Pity a visual spectacle. Chloe Lamford’s stunning set design is extravagant and stubbornly unnaturalistic with its crumpled blue sky backdrop, Tellytubby Land lawn, and cartoon-like cloud and lightning bolt hovering above the stage. Rain falls, pink smoke rises, a coffin boat glides by, and things go pop and bang throughout the performance. Annemarie Woods’ quirky, caricature-esque costumes are worthy of a mention too.

Pity verges on the political as the Prime Minister (Helena Lymbery) – not dissimilar to Mrs May in gait and rhetoric – marches onto the stage to pay tribute to the town she’s already forgotten the name of, before breaking into a song about ham and cheese sandwiches. It’s not too far fetched when you recall 2017’s awkward photos of Theresa May eating fish and chips during a campaign visit to Cornwall. But the later scene in which a group of British refugees crack open mini bottles of rosé, because it’s always time for rosé, is tasteless and makes for uncomfortable viewing. 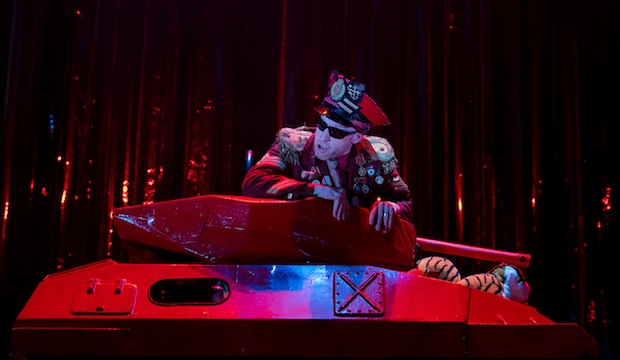 The pace begins to stumble when we reach the battle between the blues and the reds. Although both Lymbery and Sandy Grierson are excellent as the tank-driving warlords, the scene drags as the pair and their troops fire round after round at one another, performing a victory dance to heavy club beats every time they win the land. Similarly, Sal the Postwoman’s verse-like monologue in a later scene could have benefited from being a tad shorter to prevent interest wondering.

Ultimately, if you’re looking for a piece of political theatre in response to real world politics, you won’t find it in Pity. In fact, you’ll leave feeling irritated by all the nonsense. But if it’s a dose of escapist, magical realism you’re after then this light-hearted, humorous and absurd new play – that’s fully aware of itself as a piece of theatre – should serve that purpose nicely.