Sunset at the Villa Thalia review ★★★★★

Playwright Alexi Kaye Campbell takes us to the remote island of Skiathos to explore the repercussions of an encounter between two couples. There's no sense of the recent turmoil in Greece; the play starts in 1967 (though you’d only really know it from the clothes and the astonishingly affordable property prices).

In a majestic ruin of a cottage overlooking the Aegean Sea, dewy-eyed English playwright Theo (Sam Crane) and his actor wife Charlotte (Pippa Nixon) prepare to host an American couple they have met only fleetingly.

Guests Harvey and June arrive with a wave of charm. She is a peroxided former model, played with delightful dizziness by Downton’s Elizabeth McGovern. He is a force to behold. Irrepressibly charismatic and enigmatically involved with the US government, he commands the narrative. Actor Ben Miles captures magnetism and manipulation with aplomb.

The comedic domestic discomfort reaches a head with the arrival of the native Greek landlord and his daughter. From within this whirlwind Harvey masterminds the sale of the house to the young English couple, just as political coup is announced. 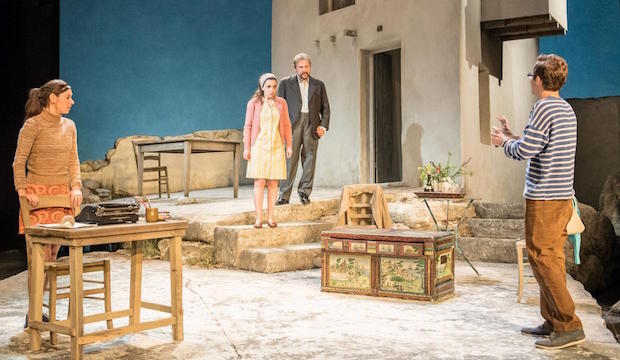 Playwright Alexi Kaye Campbell makes much meta-theatre from the echoes of Ancient Greek democracy and muses, but steers curiously clear from anything too provocative.

Then, like a bad holiday, the second half of the play limps into a sunburnt, sticky and unnecessarily emotional crisis.

It’s nine years later and democracy in Greek is restored. The two couples reunite at the same villa, with the addition of Charlotte and Theo’s two children and the paraphernalia that comes with them.

With disappointing predictability, it emerges that attraction was the main motivation for the previously intriguing dynamic between the two couples. Politics, guilt and cultural appropriation are dragged up, with all the subtlety of Greek plate smashing. The plot feels distinctly contrived. Intensity reaches hysteria and the whole tempo is jarring. The sidelined Greek characters feel like plot devices, wheeled out again for a poignant ending.

There’s a romantic earnestness in the moralising, but it still feels flimsy. For all the emphasis on what it is to ‘be a good person’, to create democracy, or to be an ex-pat, the main lesson we take away is:

Beware of getting too friendly with strangers on holiday; it's more stress than it's worth.