The Plough and the Stars tells the story of this historic event, focussing on an unassuming tenement half a mile away. If you don’t have a detailed grasp of the play’s context (which we didn’t), the first act of director Howard Davies’ production is characterised by a feeling of chaos. Chairs are flung across the stage, actors in consciously ostentatious feather hats wield swords and a plastic robotic baby doll writhes abandoned on the floor. When this farcical humour is interrupted by political uproar as rebellion erupts, the effect is disconcerting confusion.

Rather than being the play’s primary focus, the violent action of the Easter Rebellion occurs in peripheral corners of the stage or on moving platforms during scene changes. Characters peer through windows and anonymous figures lurk at doorways before dissolving into the dark. With the main action of the rebellion side-lined in this way, the audience is invited to pay attention to those left out of the action. It is the women that are most compelling: deprived of political engagement and attention, their existences become a burden. Unstimulated, they suffer from drunkenness or illness, turning to prostitution or descending into madness. 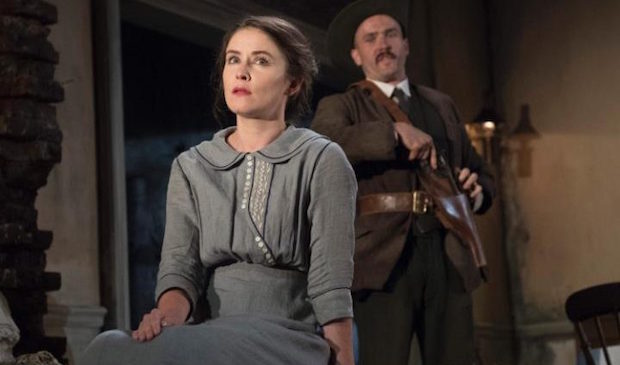 But in spite of this illuminating and incisive angle, the play tends towards disorder, preventing the audience from forging emotional relationships with the characters. Moments of power are undercut by misplaced comedy: a genuinely startling blast of gunshot, which caused a neighbouring audience member to shriek, was made disappointingly bathetic when one comedic character responded blithely to the sound of explosion, asking ‘What the hell was that?’ Here, it felt like a moment of potential poignancy had been callously swallowed.

In spite of the incoherency, a couple of stellar performances add momentary intensity which is wanting in other parts of the play. Judith Roddy is expressive and moving as Nora Clitheroe, a character who transforms from commanding at the beginning of the play to a fragile shell by the end. Having lost her husband and her unborn child within moments of each other, she moves across the stage with a dazed grief and agonising emptiness that is something like an Irish Lady Macbeth and utters her heartbreakingly repetitive lament: ‘Where is my baby? Where is my baby?’

The Plough and the Stars premiered in Dublin in 1926 and provoked riots outside the theatre because of its candid treatment of sex and religion. For a play with such an impassioned history and rich context, Howard Davies’ naturalistic interpretation is at times disappointingly lacklustre. However, some moments of great acting, a spectacular set and the explosive action between scenes mean it is still well worth watching.