Hester has tried and failed to kill herself. She has left her affluent, high-achieving husband for a flighty former RAF pilot. And now she’s ‘caught between the devil and the deep blue sea’.

Rattigan captures the struggle with aching tenderness, intricate ambivalence and infinite humanity – at a time when mental instability and scandal were dismissed as distasteful, silly or weak (and prescribed a sanity-restoring 'slap').

Director Carrie Cracknell’s atmospheric, artful National Theatre revival keeps the play in the 1950s, against a backdrop of post-war propriety and the spirit of the stiff upper lip.

Yet the gauzily lit blue flat and the nuanced spectrum of the emotions have a timeless quality; even with full skirts and clipped BBC accents, it feels like a snapshot of suffering that could be playing out in downstairs flats all across London. 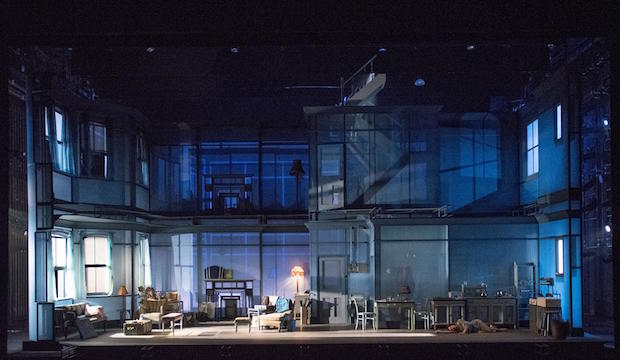 Semi-opaque walls give glimpses into the bustling stairwell and surrounding flats; the intensity of solitude amidst urban claustrophobia is evoked elegantly. Impressive supporting performances from Nick Fletcher as the bookie-cum-doctor and Marion Bailey as the landlady add to the sense that everyone has their own private crises.

Helen McCrory’s remarkably pitched lead performance makes Hester’s desperation intimate and unsettlingly familiar. Instead of a lofty tragic heroine, she seems like someone you know.

Having already impressed under Cracknell’s direction at the National as another woman on the verge in Medea, McCrory is master of the emotional break down.

She crumbles with crushing, trembling force but not a touch of melodrama. Her Hester always has a dignity and our bitter pity for the character is matched by an enduring respect.

The Deep Blue Sea is inevitably a moving, heart-wrenching watch, but there's a rewarding clarity in the production. It would be easy to glamourise the fragility and passion that propel the narrative, to make them feel mythic. But the most touching thing about this revival is the tangible humanity.