Rory Kinnear makes for a cool callous Mack in Simon Stephens' translation of The Threepenny Opera, directed by Rufus Norris,

3 CW readers are interested
The Threepenny Opera review 4 The Threepenny Opera review Lucy Brooks
Rufus Norris teams up with Simon Stephens, writer of Olivier and Tony award-winning The Curious Incident of the Dog in the Night-Time, to bring The Threepenny Opera back to the National. Thirteen years since the last production of Bertolt Brecht’s and Kurt Weill’s amoral satire, Mack the Knife reappears as sharp and cutting Olivier-winner Rory Kinnear (singing for the first time in his career) in a brash, feisty, and bold adaptation which respects and ridicules its origins.

Brecht is known by many for his theory, and Norris tackles it head-on with shameless signage, actors shouting ‘scene change’ and ‘interval’, and a literal and recurring reference to ‘tearing up’ the theatre. Even Vicki Mortimer’s hodgepodge, wire-showing set slices into the theatricality of the event. But do not fear: the ultimate aim here is entertainment, and the blistering cleverness seldom overshadows Stephen’s comic and blunt (if not occasionally formulaic) script, and Weill’s iconic score. 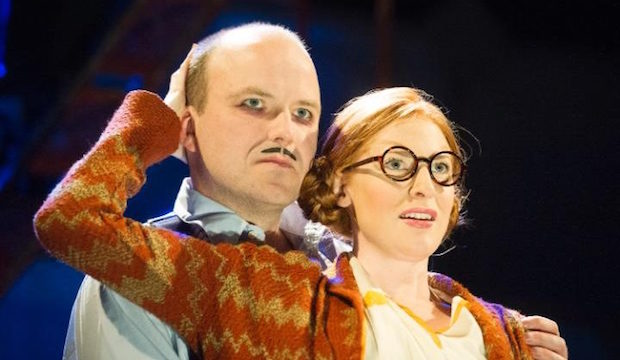 In this fable of sex, crime, and immorality, Kinnear struts a cool and callous Macheath even when, after marrying Rosalie Craig’s demure-yet-devilish Polly Peachum, the wrath of her parents brings about his almost downfall. And, having admitted trepidation about belting out the songs live on stage, Kinnear shows that there's a musical theatre career in him yet. Sharon Small’s Jenny Diver, Macheath’s old love from the Wapping brothel, offers up real tragic moments, while both Debbie Krup as Lucy and Craig simmer confidently in the Jealousy Duet. The music is executed effortlessly by the mobile band, although this at times results in lyrics being lost.

Yet it’s the patchwork of Weimar pastiche, the endlessly stylized and constantly referential visuals that are the highlight. Haydn Gwynne’s Celia Peachum is the spitting image of Otto Dix’s Anita Berber portrait, while Mr Peachum (Nick Holder) is decked in double-breasted suit, Louise Brooks bob, and Dietrich eyebrows. They are the stand-outs, oozing character from every limb. Cabaret corsets, a hanging half-moon, knee-high red leather boots, and Valkyrie-inspired helmets all enrich the embellished texture and draw inspiration from the source text, John Day’s also satirical The Beggar’s Opera.

Raucous, irreverent, and brutal, this epic brings the Victorian East End to the present-day Southbank. Along with more than a few Weimar allusions, it seamlessly alludes to the long history of the play’s origins while ominously noting its continuing significance in today’s political climate.