In past productions the original Shakespeare has been distorted beyond all recognition in an attempt to tame the play’s internalised misogyny to suit the palates of a contemporary audience: Charles Marowitz's 1975 'free adaptation’ added brutal rape to turn the play into a dark study of domestic abuse, while the macho posturing in Phyllida Lloyd’s all-female version at the Globe turned the play into a comic examination of what men want; others still have played her capitulation as ironic.

But not so with Caroline Byrne’s version, which dives headfirst into the tension between the play’s levity and its unsavoury events. 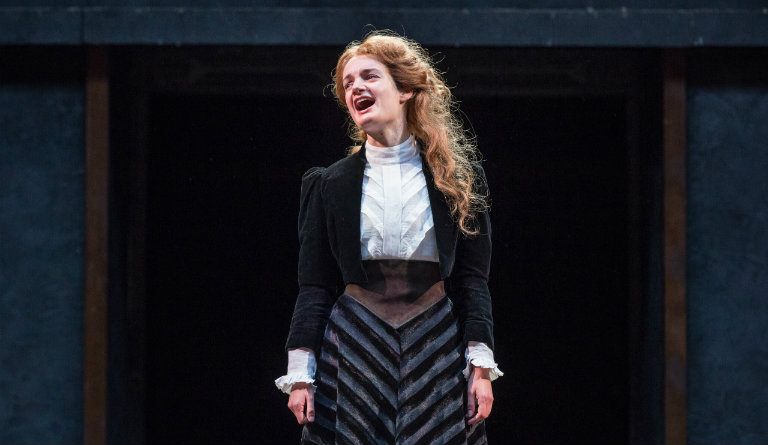 Her version transposes the action to 1916 Ireland on the 100th anniversary of the Easter Rising, but also of the Proclamation of the Republic, which demanded equal status for women.

Adopting the idiom of Irish folk music, the uilleann pipes and bodhrán flit from mellifluous lilt to desolate soundscape to underscore the contradictory elements of the production, as it vacillates between joyous energy and the horrifying destruction of Katherine (Aoife Duffin).

The swaggering and strutting Tranio (Imogen Doel), cleverly cross-cast to emphasise her struggle to find higher social footing, embodies the lightness of the play, almost dancing through the action.

Although the joyous moments occasionally threaten to blunt the audience’s empathy for Katherine, hers and Petruchio's (Edward MacLiam) raw performances ensure that we never lose sight of the cruelty at the heart of the play.

Byrne's modern update brings a new clarity to Katherine's abuse, focussing on the feminist issues without dampening the poetic strength of the original. The framing device of Christopher Sly, has been replaced by a wholly new ballad; rather than sing, Aoife Duffin screeches it, her desperation haunting the whole production.

Her unquenchable fury speaks to a modern audience as an expression of untold injustices still felt by women 100 years after the Irish rebellion.