1 CW reader is interested
Imogen, The Globe review 4 Imogen, The Globe review Natalie Sauer
Part of Emma Rice’s Wonder Season, Imogen at the Globe is a radical and high-octane adaptation of Shakespeare’s Cymbeline. With the tag-line ‘Renamed and Reclaimed’, Matthew Dunster’s production acknowledges Imogen as the real heroine of the play. It also transports her from ancient Britain to the seedy underbelly of modern day East London. With mass drug operations, gang wars, and an overwhelming array of tracksuits, Imogen is modern, inventive, and an audacious re-fashioning of what we consider Shakespeare.

Known for featuring many of the classic Shakespearean tropes -- disguise, mistaken identity, murder plots and star-crossed lovers -- Imogen’s story is at once tragic and comedic, touching and troubling. Dunster expresses this complexity by incorporating dance, BSL, and grime hip-hop songs to show the many ways to tell a story. It’s visually striking, including a butcher’s curtain framing the stage and gravity-defying fight scenes. With so much at play, it takes some time for all the elements to lock in, but by the second half it hits its stride, making light of the plot’s outlandish coincidences. 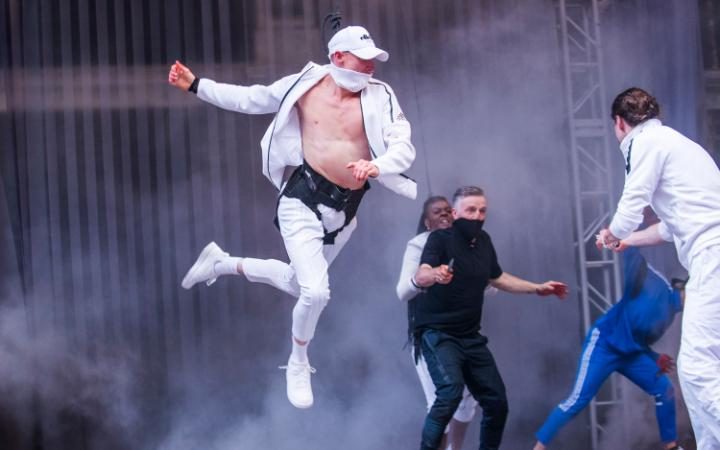 The supporting cast offer up some masterful and hilarious performances. Claire-Louise Cordwell’s Queen is brash, seductive and sinister, and Matthew Needham’s Giacomo is sickly suave in his Gucci-esque all-white ensemble. But it’s Joshua Lacey as Cloten who steals the show, posturing about with a machismo absurdity, a perfect fusion of old-school Shakespeare caricature and lad brutishness.

But while the production proves that Shakespeare can be endlessly re-invented, it falters slightly in its aim to reclaim the story for Imogen herself. Hill is functional, but seems under-developed and is outshone by her surroundings. The ending does offer a taste of Imogen’s unrealised power, but only serves to demonstrate what was missing all along.

Regardless, in Imogen there is truly something for everyone, from jokes about etymology to an insanely energised dance-troupe led by Ira Mandela Siobhan as Posthumus. It is yet another exhilarating and imaginative re-interpretation of Shakespeare under Emma Rice’s new leadership.