Iqbal Khan returns to the Globe this summer with a haunting, evocative though slightly incoherent take on Shakespeare's Scottish Play

1 CW reader is interested
Macbeth, The Globe review 3 Macbeth, The Globe review Natalie Sauer
After his groundbreaking 2015 production of Othello at the RSC where a black actor (Lucian Msamati) was cast as Iago, Iqbal Khan takes to the Globe with a pyretic and gothic version of the Scottish play. Part of Emma Rice’s new artistic season, Khan’s Macbeth is powered by haunting visuals, an ominous score by Jocelyn Pook, and the addition of Macbeth’s child.

Ray Fearon, an RSC regular and Coronation Street’s Nathan Harding, stars as an ambitious and poetic Macbeth, while Game of Thrones’ star Tara Fitzgerald creates a disturbingly unhinged Lady Macbeth. Atmospheric and stirring, Khan’s Macbeth hits many highs, yet it is occasionally muddled by a lack of coherency, consistency, and chemistry.

As one of Shakespeare's best-known plays, Macbeth is always a spectacle on stage, and Khan creates a grotesque background for the violence and magic. The witches are four hooded actors who contort prop body parts to create three floating creatures. Their famous incantations are set to music, creating an impeccably doomy ambience. However, the blunt silences that follow tread heavily on the pacing of the rest of the piece. Fearon hits the stage with passion and ferocity, but the relationship between him and Fitzgerald seems stilted. This is a shame, because her Lady M is cleverly reckless and erratic, at times engaged and at others apathetic. 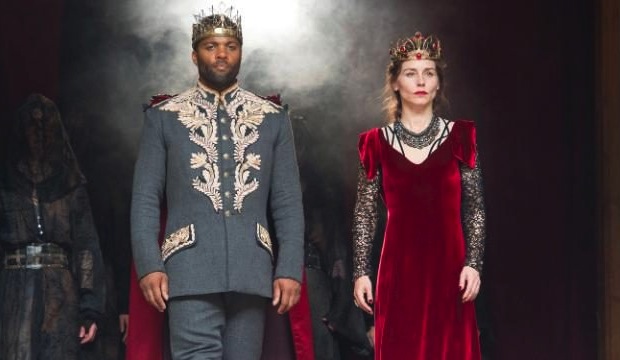 Moments of mastery, such as Nadia Albina’s charismatic Porter and Fitzgerald’s ‘Out damned spot’ scene, are unfortunately weighed down by lagging scenes (Macduff’s meeting with Malcolm, for instance). Khan’s inclusion of a Macbethian child is very compelling, but because the child is neglected by almost every character his presence is rendered ambiguous. Without enough nuance, the child confuses the conclusion and the tragic impact seems deflated.

Nevertheless, Khan’s Macbeth is at its best forceful and evocative, even if occasionally stained. It may not be as successful as Othello, but it is still an intriguing and welcome new approach to Shakespeare.