Nina Raine's thrilling examination of truth, justice and consent gets a West End transfer after selling out at the National Theatre

Consent – the simple giving of permission – is one of the most abused words in our language. It's the two syllables upon which much of law depends. It's at the core of every rape trial and the crux of each marriage vow.

In a new collaboration between Out of Joint and the National Theatre, playwright Nina Raine unpacks the endless complexity surrounding this one word in two-and-a-half hours of thrilling, thought-provoking and bitterly funny theatre.

Consent is an artfully-wrought play, swirling together strands of courtroom theatrics, domestic drama and Greek epic to scrutinise the titular concept from every angle. It was eight years in the making, with days spent observing real rape trials, but the weight of research supports rather than crushes the characterisation. 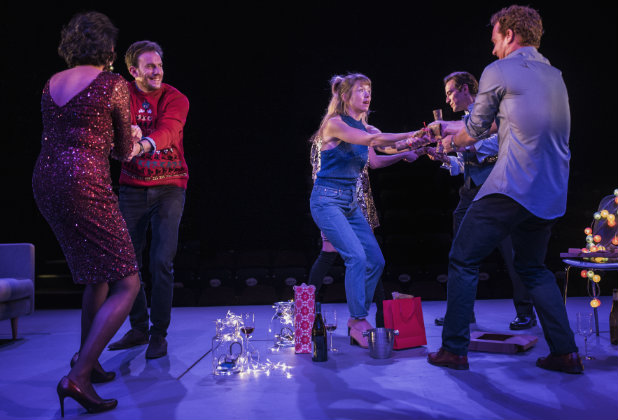 The cast of well-heeled, well-educated Londoners feel familiar, thanks in equal part to fluent dialogue and deft, rounded performances.

Barrister Ed (Ben Chaplin) and his wife Kitty (Anna Maxwell-Martin) live in a half-unpacked Lewisham house with four-week-old Leo (who is played with pink-cheeked perfection by Raine’s own baby, Misha Wakefield Raine). The couple share champagne and quip about current cases with friends and fellow lawyers Rachel (Priyanga Burford) and Jake. Later we meet Zara (Daisy Haggard), an actress preparing to play Medea and longing for a baby of her own, and Tim (Pip Carter) yet another lawyer, whose body odour is the butt of jokes.

Other gags stem from snobbery, sex and anecdotes about defendants; it’s the kind of brutal, unchecked humour that’s woven around the intricacies of rape, murder and mutilation. As the story knots into infidelity, post-natal depression, custody battles and rape accusations (in and out of court), Roger Mitchell’s production cranks up the pace. It's tense to watch yet densely packed with moral and intellectual arguments.

Consent is an examination of the law – whether reason can or should be truly free from passion, the fine line between examination and exploitation, the potential power of a punitive system. But it’s also an exploration of justice beyond the courtroom: our quotidian truths and ability to understand, empathise, make amends and forgive. It asks multiple questions and denies any possibility of singular answers.

Logic and emotion conflict and collapse into the triple theme of law, theatre and human relationships. Arguments are both the broad and intimate, but what’s more remarkable is how vital they feel. Instead of presenting dry, didactic debate, Consent animates the issues, bringing them closer to home. We feel culpable in the injustices and suddenly uneasy about our own abilities and rights to make judgements.