How The Light Gets In Festival, London 2019

HowTheLightGetsIn gives a cerebral twist to the traditional format of events and live performances. Brace yourself for some big thinking as philosophers, musicians and comedians come together in London. Based in Hampstead's grand Kenwood House, the festival hosts an intellectually stimulating programme of debates, talks and concerts this year. With 100 events packed into two days there's plenty to choose from, including over 50 debates and talks, and 40 bands and comedy acts.

Highlights include International Development Secretary Rory Stewart, who debates the future of politics after his surprise shake-up of the Conservative leadership race. Another comes by way of philosopher, sociologist and cultural critic Slavoj Žižek (screenwriter and presenter of The Pervert’s Guide to Cinema and The Pervert’s Guide to Ideology) who is speaking at HowTheLightGetsIn via a video link.

The theme of the festival this year is Uncharted Territory. Through talks and debates, the speakers explore how to navigate the uncharted territories we face, from philosophical puzzles to the future of sexuality and the state of the nation.

Debates include 'The End of Left And Right', which ponders whether the way we’ve divided our political leanings since the French Revolution is still relevant, or whether it’s time to move on from the left and right divide. And don't miss economists Yanis Varoufakis, Mariana Mazzucato and Guy Standing dissecting the failures of capitalism.

Hungry for more back and forth? Look to 'The Mystery of Life': a deep dive into what life really is, based on new research from our explorations of the planets of the solar system. There’s also 'What’s Wrong With Us', questioning whether the growing ability of computers to analyse our symptoms will eventually make doctors redundant. And, in light of the 50th anniversary celebrations since man first landed on the moon, there’s a debate titled 'Adventures in Space', which questions whether we should applaud the return to venturing beyond Earth, or give up on our fantasies of conquering the moon, Mars and beyond.

Nighttime is when the festival fully lets its hair down. Guests could discuss the day's talks over a four-course banquet, watch an independent film or documentary in the Cinema tent or fully let loose at a themed party. Depending on which tent you choose, you could wind up listening to anything from DJ-mixed dance beats to soulful folk songs. There's also cabaret performances cranking things up a notch and a stellar line-up of comedy, which this year includes stand-up sets from Tony Law, Olga Koch, Alfie Brown, Sophie Duker among others.

So, what are you waiting for? It's time to let the light in.

How the Light Gets in Festival 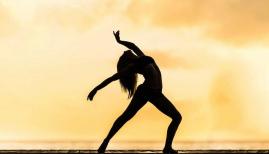