A child-friendly production of Shakespeare's The Winter's Tale has landed at the Dorfman, National Theatre

We've got a solution: take them to the new child-friendly production of The Winter's Tale by Justin Audibert, directed by Ruth Mary Johnson, which is on this February at the Dorfman at the National Theatre. Recommended for kids 8+, there were numerous school groups there when we attended with our six-year-old mini-critic. The children were completely enthralled with the production, which was super easy to follow, and lasted about an hour – the perfect length to keep a child interested and wanting more. 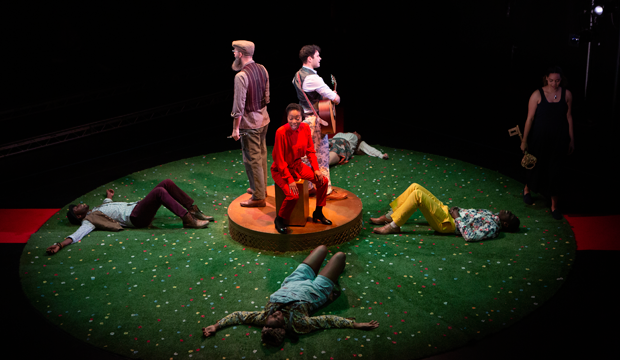 The show begins with a wedding: Perdita (Aisha Toussaint) and Florizel (Stanton Wright) are about to say their 'I wills,' but Perdita is unsure she can go through with it and rewinds us back through her life story. Before Perdita's birth, her jealous father, King Leontes of Sicilia (Joseph Adelakun), accused his Queen, Hermione (Wreh-Asha Walton), of having a child with his pal, King Polixenes of Bohemia (Terique Jarrett), and banishes the child to the forest after her birth – cue spooky forest bear sounds, but no actual bear.

Perdita is rescued and raised by a farmer and his daughter in Bohemia ('I liked it when the shepherd found the baby,' our mini-critic whispered). Fast-forward 16 years, and Perdita meets Florizel, they fall for each other, and it's wedding time. The family mix-ups are resolved when loyal officer Camila (Ebony Feare) – who worked for Leontes and is now on Polixenes' staff – sends the happy couple to Sicilia and everyone arrives on shore simultaneously to be reconciled and reunited. In other happy news, the statue of Hermione, who died of heartbreak when all of this came to pass many years ago (or did she?) – comes to life. Our little critic sweetly decided she'd fainted and they thought she was dead which was why it was so easy for her to come back to life.

The story was condensed for younger audiences, but stuck very closely to the original in terms of themes and original text, and it was impressive how accessible it felt: the six-year-old understood pretty much everything that was going on – even though much of the story focused on subject matter that was abstract and intense (adultery, banishment, death, rediscovery of identity and self).

Highlights, according to a six-year-old:

'I like how they did the dance with the ribbons!' (There's a gorgeous Maypole dance with colourful ribbons).

'I liked when the little boy did the dance – it was really funny!' (Perdita's brother, Mamillius, is a puppet, who does some very funky dancing at the beginning of the story before his unfortunate and untimely death).

'I liked when the statue came alive.' (Essential timing because the little one was getting very emotional with the wedding and reunion).

It's a gorgeous production and if you go over half-term, there are family-friendly activities to make the show come to life, including staging Shakespeare workshops, family design workshops and a games and storytelling workshop for children with additional needs, on the same day as the performance for special-needs families (Wednesday, February 20 at 2pm).

Best treat of the half-term hols, we reckon – especially with the Imagine Festival on that week. 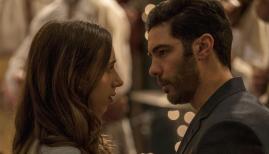 The Kindness of Strangers review 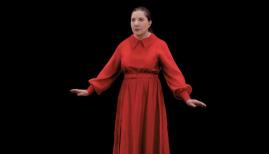