Calling all swifties: the Queen of millennial pop comes to London's Wembley Stadium as part of her trailblazing album tour

Fans will be pleased to hear, then, that Swift is touring the UK and Ireland in 2018, with show-stopping performances at London's Wembley Stadium scheduled for 22 and 23 June. With a capacity of 90,000, concert-goers can expect a suitably grand and gutsy end to her tour here, which also includes the Etihad Stadium in Manchester and Croke Park in Dublin.

Tickets for the first set of UK and Ireland shows (on the dates 8, 15 and 22 June) were released on Friday 1 December. Tickets for the recently announced additional shows (on 9, 16 and 23 June) go on general sale on Friday 8 December at 9am GMT. Both releases can be accessed here, excluding performances at Croke Park.

Since its release on 10 November, reputation has pulled no punches. It's sold more than two million copies across the globe and debuted at number one in the UK album chart.

The songs showcase Taylor's versatility and flexibility through many new musical avenues. '...Ready For It?' artfully mixes gritty bass drops with smooth and clipped vocals, while 'End Game' drafts in trap-rap mastermind Future for an uplifting R&B-inflected hit. All of this is crowned by the brilliantly biting 'Look What You Made Me Do', which acquired 28 million views on YouTube within the first 24 hours of its release. 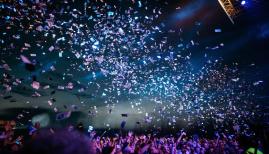