In 2014, Sam Smith stepped out the shadows with his debut album, In the Lonely Hour, which spawned not one but two chart-topping hits – 'Money on My Mind' and 'Stay With Me' – and shifted more than 12 million copies, definitively proving this singer-songwriter can hold his own.

Since recording the theme song Spectre – and working with Mary J Blige on her unexpected dive into deep house on The London Sessions – Sam Smith took a little break to enjoy the fruits of his labour.

But now's he back with an album unpacking all the personal struggles that accompanied his meteoric rise. His new look says it all. Gone is the Elvis slick, he's embraced the stubble and is looking straight at us, all of which suggests that The Thrill of It All promises to be more raw, personal and confident than his debut effort.

And if his latest number one single is anything to go by, Sam Smith hasn't lost his touch when it comes to laying down powerful gospel-influenced pop records.

Sam Smith will be going on tour to support his album in spring 2018, including a string of shows in London's 02 Arena. The first couple of shows are already sold out but there are still some tickets left for his concerts on 9 and 10 April. Our guess is, once the album drops, there'll be few left so don't miss out. 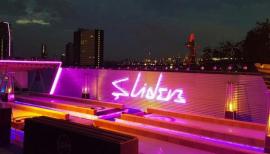