Immerse yourself in Japanese culture for the day, as the action-packed Japan Matsuri festival returns to Trafalgar Square for its ninth year

TRY CULTURE WHISPER
Receive free tickets & insider tips to unlock the best of London — direct to your inbox
This year looks set to be just as exciting as a new series of traditional Japanese acts prepare to showcase their skills on two stages. Highlights of the first stage include the fantastical top-spinning of Monnosuke Mimasu, who will display his proficiency in the art of kyoku-goma through gravity-defying acts of balance. One of this acts involves swords, strings, and sticks.

The second stage will be hosting a range of martial arts, from karate to Kyudo archery – a Japan Matsuri first.

There will be just as many opportunities to participate in activities as there are to watch them. In the family area, you can learn Japanese calligraphy, the art of origami, or practice manga cartoon drawing. Meanwhile, the Nodojiman karaoke competition offers a chance for budding singers to unleash their inner divas.

The festival is free to attend, and with a busy schedule running all day, it looks set to provide fun for the entire family. 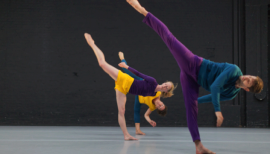 Joe Moran and The Habit of Dance