Review: Here We Are, photography exhibition by Burberry ★★★★★

This September, the Burberry spectacle is bigger and better than ever.

Excitement for Burberry’s September Collection reached fever pitch when the British brand announced it would be swapping the illustrious surroundings of Hyde Park for the edgy interiors of the recently renovated 18th-century Grade II listed Old Sessions House for its catwalk show. Throw a major exhibition of British photography into the mix, and Burberry’s the name on everyone’s lips

Thankfully, Here We Are, is as good as the hype branded it to be.

TRY CULTURE WHISPER
Receive free tickets & insider tips to unlock the best of London — direct to your inbox
Celebrating all things British, the temporary photographic exhibition features over 200 photographs from 30 British social and documentary photographers working predominantly in post-war Britain. The earliest work on display – and it is a vintage beauty – is Bill Brandt’s York Villa Bath, 1935. Hanging proud on its own wall, the black and white photograph depicts a trussed up housekeeper polishing an ornate mantelpiece in a stately home. Renowned for documenting the lives of the affluent British, it slots in nicely next to Karen Knorr's Belgravia series, depicting the home interiors of wealthy Londoners in the 80s. 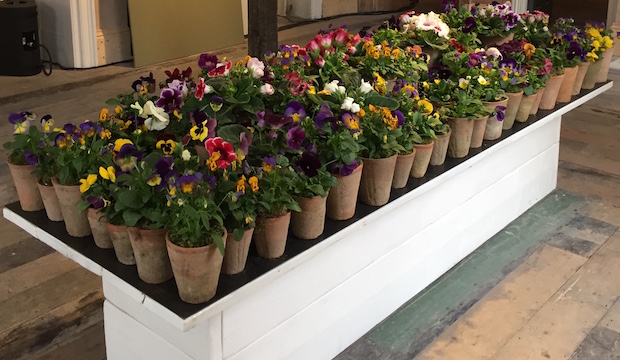 Spread across three floors and multiple galleries, the photographic exhibition reflects different aspects of British culture and our relationship to them.

Christopher Bailey, Creative Director of Burberry and Co-curator of the exhibition, said: ‘When we started thinking about curating Here We Are, I knew I wanted it to celebrate a certain strand of British photography that I have always loved – one which documents the many and varied tribes and clans and classes that make up this island of ours. It’s the spirit of these photographs – sometimes ironic, sometimes tender, always truthful – that has guided our September collection.’

While the September Collection is not the primary focus of the exhibition, it dominates the imposing central atrium of Old Sessions House. As you walk up the stairs into the lofty central arena, you are confronted with a wall of well-healed well-dressed mannequins donning Burberry trenches, chiffon chemises, and baby pink parkas. Just a subtle reminder (as if we needed one) that Here We Are is a celebration of Burberry's sartorial heritage, more than anything else.

In this spirit, look out for the special collection of 70 Alasdair McLellan photographs – his largest solo exhibition to date – presented in celebration of his new creative collaboration for Burberry's September 2017 and rainwear collections. His photographs of teenagers at a Belfast boxing club, taken in the early noughties, are a notch above the rest. Describing the club as a ‘positive haven for kids growing up against a backdrop of political conflict’, the black and white stills are honestly raw. 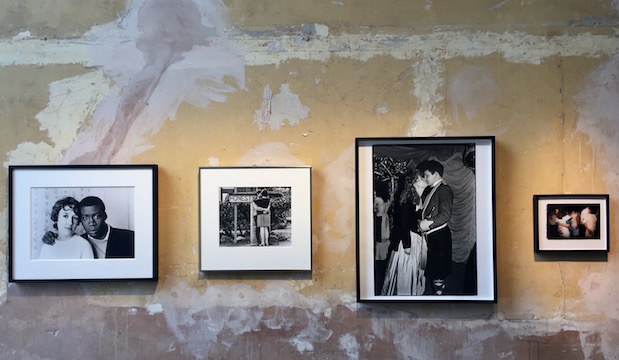 Images of Britain in all its unadulterated glory abound. The second floor gallery entitled ‘The Garden as a Self Portrait’ reveals a British penchant for gardening, while ‘9 to 5’ reveals the life of British working professionals. In a full suite of black and white photographs drawn from Brian Griffin’s book Copyright, businessmen are depicted in staged tableaux that engage as much as they confuse. Snogging ravers, Teddy girls and boys, picnickers and cricket players are amongst the subjects of the remaining portraits garnishing the magnificent unplastered walls of Old Sessions House.

The backdrop to Here We Are is almost as arresting as the collection itself. Recently renovated, Old Sessions House was once the largest courthouses in England. Built in 1779, its Palladian architecture, façade constructed in Portland stone and grand coffered central dome with imposing chandeliers has attracted attention from artists, photographers, and topographers for generations. Burberry has now joined its long list of illustrious occupiers.

With the Burberry September Collection presented alongside the exhibition in the House’s central atrium, it really is the opportunity to celebrate the best of British.

Workshops at Old Sessions House are free but ticketed. To find out more, visit www.burberry.com 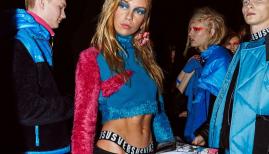 What to expect from London Fashion Week SS18