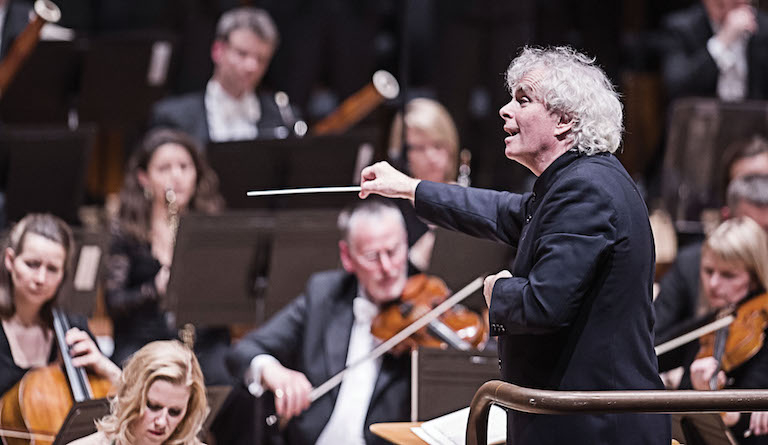 Sir Simon Rattle is leaving Berlin to conduct the London Symphony Orchestra. Photograph: Tristram Kenton
When a great symphony orchestra strikes up, what exactly is the man or woman on the podium, wielding the baton, doing that those highly polished and experienced players couldn’t be doing on their own?

There are orchestras who play without a conductor, among them, at times, the Orchestra of the Age of Enlightenment, but most, especially those tackling works on a gigantic scale – the symphonies of Mahler, Shostakovich, Tchaikovsky – need a ringmaster.

But the best are much more than ringmaster, although that is an element of the job). And Sir Simon Rattle is among the best, and that is reason enough for rejoicing in the capital that he returns this week, starting 14 September, to the top job at the London Symphony Orchestra, based at the Barbican.

Sir Simon will for one year straddle London and Berlin, while he finishes his 19-year tenure with the prestigious Berlin Philharmonic Orchestra, but he is very driven in his commitment to his new British ensemble, and he arrives in the full glare of high expectations for what he can do, not only in the concert hall on any given night, but for music in London and the rest of the country.

Attractive and articulate he has an inextinguishable passion for the works he champions. Take, for example, his recent revisiting of neglected works by Haydn. Josef Haydn is the contemporary of Mozart whose highly inventive music is destined to be overshadowed by that of his younger rival. Concert planners consider Haydn to be box office death. But in the best hands his music is scintillating, and Rattle, with his typically fresh and insightful investigation of the original scores, is giving it a new lease of life.

Rattle is also fiercely loyal. For 18 years from 1980 he was at the helm of the City of Birmingham Symphony Orchestra, during which time he made such a mark, and transformed the orchestra to such an extent, that he was courted by bigger, better-funded orchestral institutions from all over the world. But he stuck his ground, stuck to Birmingham, and left the orchestra in such good shape that it was readily taken on by the world-class Sakari Oramo, now chief conductor of the BBC Symphony Orchestra. That orchestra is at the heart of the BBC Proms, where Rattle is always a big draw.

That the CBSO now has Britain’s first woman principal conductor in Mirga Gražinytė-Tyla, is arguably the legacy of Rattle’s forward-looking style. And now he is looking forward to a return to Britain, at a time when the musical world is in turmoil over the impact of Brexit, which is catastrophic for the free movement of singers and players, and their kit.

So what will he be doing, apart from waving that baton? Well, he is lobbying hard for a new concert hall for London, the favoured site being the current Museum of London, which is moving to Smithfield. He has an authority and charisma that makes people want to get on board, which will help with funding that immense project.

It is not enough to be a brilliant musician to be a conductor – yes, you have to be able to hear and hold an entire orchestral score in your head, to understand what it takes to play every instrument of the orchestra, be it in the string, woodwind, brass and percussion section. You also have to understand about singing, and with a wife, Magdalena Kozená is a singer, Rattle is at advantage.

But above all, even though you are team captain you have to be a team player, and it is conductors with great social and diplomatic skills who get on. In a world where classical music is up against a lot of competition for audience attention, there is no room for self-serving egos.

As a very visible ambassador for the London cultural scene in general and classical music in particular, Sir Simon’s return to Britain is an event that makes waves far beyond Barbican Hall. And everyone who cares about music will be joining in the refrain: “Welcome home!"

Sir Simon Rattle joins the London Symphony Orchestra with a 10-day festival entitled This Is Rattle. For LSO dates and tickets click here.