Wayne McGregor’s The Dante Project, a new ballet inspired by The Divine Comedy, will be available to stream on the Royal Opera House's digital platform

Dante’s The Divine Comedy, written in the 14th century, is considered the greatest literary work in the Italian language. It describes the poet’s journey through Hell, Purgatory and Paradise, guided first by the poet of Ancient Rome, Virgil, and then by the love of his life, Beatrice.

The Divine Comedy – incidentally, not a comedy in today’s sense of the word – is a powerful and wide-ranging work; and it’s a measure of Wayne McGregor’s ambition that he undertook to transpose it to the stage in a full evening ballet. McGregor assembled an impressive array of collaborators, including the composer Thomas Adès, artist Tacita Dean, dramaturg Uzma Hameed and lighting designers Lucy Carter and Simon Bennison.

He also uses a vast number of Royal Ballet dancers from among all ranks supporting Edward Watson as Dante, in his final performances with The Royal Ballet before retiring from the stage after a stellar 25-year career.

Thomas Adès’s score is superlative: lush, varied, erudite and eloquent. A prolific composer, Adès had never before created work specifically for ballet; but inspired by his love of Dante’s poem and previous musical treatments of it, namely by the Romantic composer Franz Liszt, he produced a score that is by turns energetic, lyrical, vaudevillian, ascetic and finally revelatory, and always engrossing. On opening night, Adès also conducted the Orchestra of the Royal Opera House.

Tacita Dean’s Inferno is a place of darkness, the backcloth a chalk on blackboard drawing of inverted mountains which are reflected right-side up in an oval above the stage to which the denizens of hell can aspire, but can never reach.

By contrast, her Purgatorio is a place of light, where a lush green tree appears to promise redemption through repentance. 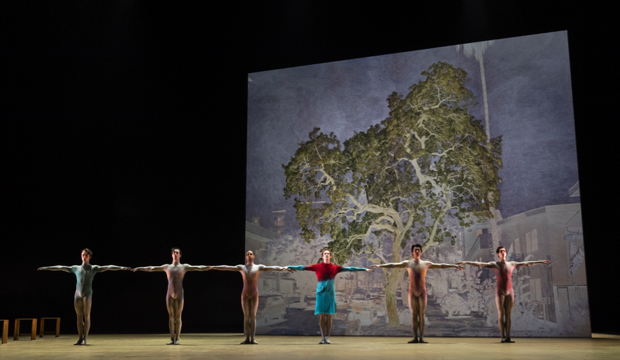 Artists of the Royal Ballet in The Dante Project © ROH 2021. Photo: Andrej Uspenski
Finally her Paradiso is the cosmos, where the dancers as celestial bodies are points of light moving vertiginously against the immensity of the universe, while a film projected above the stage shows an ever-shifting circle of colour.

Each of the three realms makes up one act. Inferno: Pilgrim is by far the longest; Purgatorio: Love the most cohesive in terms of the execution of choreographic ideas; finally Paradiso: Poema Sacro culminating in a redemptive pas de deux for Dante and Beatrice (Sarah Lamb).

Guided by Virgil (Gary Avis, always an imposing presence, if this time costumed in an unflattering chickpea-coloured shift) Watson’s stupendous Dante travels through these realms, his constant yearning for Beatrice illustrated in Purgatorio, where we see the lovers as remembered by him at three stages of their lives.

Watson’s physicality is always gripping, his body transmitting the agonies of his soul with every step, every slump of the shoulders. 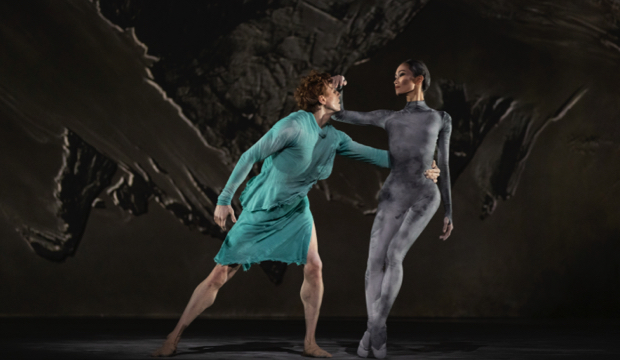 Edward Watson and Fumi Kaneko in The Dante Project © ROH 2021. Photo: Andrej Uspenski
In short, The Dante Project is primarily a visual and auditory spectacle, where weaknesses in choreography and characterisation are made up for by the company’s superb dancing and the richness of the production.