After a few years in self-inflicted wilderness, in which he now says he was trying to self-sabotage, Polunin can carry a ballet, not with the explosive technique and commanding stage presence of his earlier years, but still in a credible way.

Polunin commissioned Johan Kobborg to create a new version of Romeo and Juliet for himself as Romeo, the delightful ballerina Alina Cojocaru as Juliet, and a full company. The work premiered in Verona in the summer of 2019 and has finally reached the Royal Albert Hall in London after two Covid-induced postponements.

Kobborg had a distinguished dancing career, both in his native Copenhagen and in London, where he was a highly rated principal dancer with the Royal Ballet for many years. He has since been developing an international choreographic career.

His short Romeo and Juliet uses a bowdlerised and at times over-amplified recording of Prokofiev’s score, and he structures the ballet as a series of short scenes separated by blackouts.

By way of a prologue loaded with premonition, a fleeting scene shows the white-clad lovers lying down in a pool of milky light before being startled awake.

Then, as the ballet proper starts, we meet the protagonists: first Polunin as Romeo bursts onto the stage, executes a series of ballet jumps and makes way for Cojocaru as a very young Juliet, her manner that of a feverish child.

Now we are in the town square. 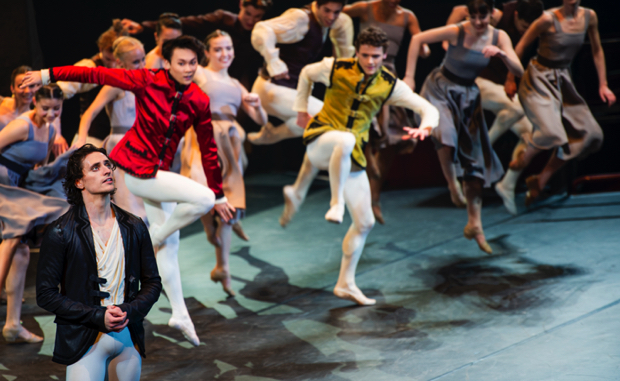 Sergei Polunin and ensemble in Romeo and Juliet. Photo: Jack Thomson
David Umemoto’s multi-purpose set is impressive, a solid dark brick-coloured structure of arches and vertiginous stairs, that works both as town square and ballroom, and provides an appropriate setting for the balcony scene, as well as a suitably funereal crypt.

However, Kobborg’s structure lacks narrative tension. Most scenes are very short and the pauses between them too long. And Kobborg forgoes key elements of traditional versions of the ballet, most prominently the morning after the wedding night. As well, after Romeo kills Tybalt, it’s not Lady Capulet, Tybalt’s aunt and probably lover, who confronts him, but a frantic red-clad Juliet. 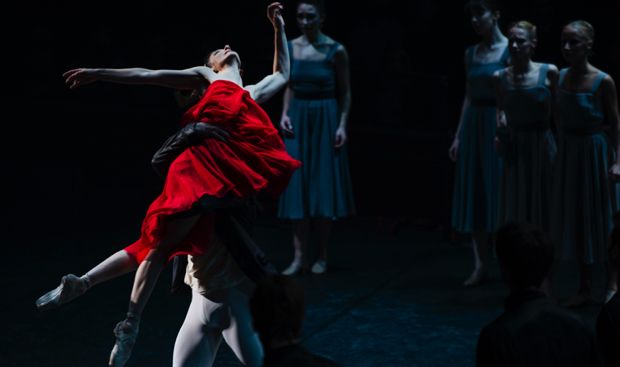 Alina Cojocaru as Juliet, Sergei Polunin as Romeo. Photo: Jack Thomson
It would have been interesting to learn a little more about the reason behind his choices, but there's no explanation in the choreographer’s note in the glossy programme.

Not a great dance actor, Polunin dances Romeo in a mostly self-referential way, though he is a solid, attentive partner to his Juliet. Cojocaru dances Juliet as a slightly gawky girl, flitting around with shoulders slightly slumped, but she isn’t given a clear narrative nor the agency to drive the plot, so this Juliet doesn’t burrow into our hearts as much as she should.

The well-drilled ad-hoc ensemble of international freelance dancers performed with commitment, even if in drab, unflattering costumes; a special mention must go to the young Daichi Ikarashi, a fizzy and technically exciting Mercutio, well matched by Nicholas Gaifunin as a dastardly Tybalt.