Kenneth MacMillan’s Romeo and Juliet is a fail-safe way to open a ballet season (it’s no coincidence that Birmingham Royal Ballet also chose this work to kick off its own 2021/22 season). With its eye-filling, rousing crowd scenes, Prokofiev’s transporting score and, of course, a passionate and ill-fated love story at its centre, it’s been a crowd magnet since its premiere in 1965.

For the opening of its first full season in almost two years, The Royal Ballet has thrown everything at this production, with a number of principal dancers taking on relatively modest roles. One such is newly minted principal Mayara Magri, having an absolute ball as one of the three harlots that ply their trade in the town square of Verona.

Nicholas Georgiadis’s sumptuous designs, creating scenes often reminiscent of Renaissance paintings, appear to have been spruced up and look dazzlingly fresh. The ensemble pieces show renewed vigour, with the town square brawls and sword fights particularly exciting, and the big ball at which Romeo and Juliet first meet suitably grand.

MacMillan’s meticulous storytelling is crisply clear; had you never heard of Romeo and Juliet, you’d be able to follow the story with no further aids, something present-day choreographers would do well to learn from.

Of course, the core of the ballet is the story of the young lovers Romeo and Juliet; and on opening night they were danced by principals Cesar Corrales and Francesca Hayward. 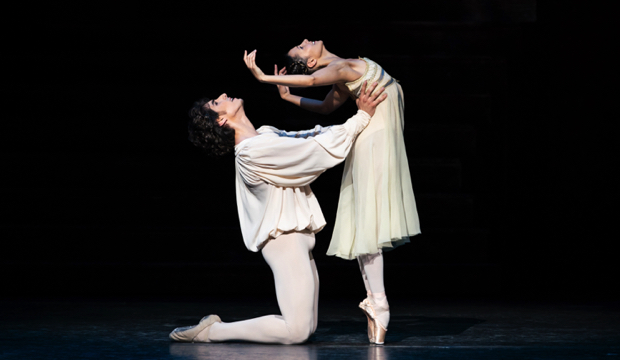 The Royal Ballet, Cesar Corrales as Romeo, Francesca Hayward as Juliet © ROH 2021 Photo: Helen Maybanks
MacMillan’s steps and inflections are set; but there is plenty of room for dancers to put their own imprint on the characters. Despite being in her late 20s, Francesca Hayward absolutely looks the part of a 14-year-old on that ill-defined cusp between childhood and adulthood. She is small, delicate and, when first seen in the nursery, as playful as a kitten.

Throughout, her Juliet remains a child overwhelmed by the magnitude of the feelings Romeo has awakened in her. She seems more driven by fate than the agent of her own destiny. In the bedroom pas de deux after their wedding night, when Romeo has to escape Verona, she is almost limp with grief, and after he’s gone she sits motionless on the bed as if stunned. 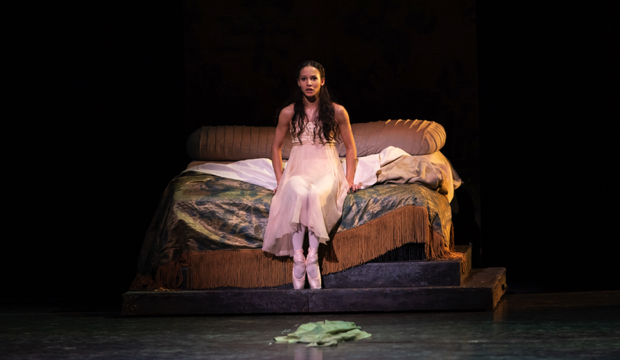 The Royal Ballet, Francesca Hayward as Juliet © ROH 2021 Photo: Helen Maybanks
As Romeo, Cesar Corrales is more reckless Latin lover than young Veronese nobleman, impulsive though Romeo was. His partnership with Hayward is convincing, though their pas de deux never gave us the kind of abandon that lifts their love to soaring and heart-rending heights.

Marcelino Sambé was a fine Mercutio, with first soloist James Hay an unusually compelling Benvolio; Matthew Ball has a fine line in villains, though his Tybalt is a little one-note: arrogant, cruel, entitled, until the final minute when he regrets his dishonourable killing of Mercutio.

One last word for Gary Avis, one of the Royal Ballet great artists, who gave us a cogent Lord Capulet, his every intervention adding heft and context to the story.

As the season continues, a variety of different casts will take on the main roles.