Inevitably overshadowed by the war in Ukraine, The Royal Ballet’s sumptuous production of Swan Lake returned to the stage at Covent Garden

Earlier, The Royal Ballet’s Russian principal Vadim Muntagirov had announced in his Instagram feed that he was dedicating his performance as Siegfried to the people of Ukraine, adding he was praying for peace.

Naturally, the Ukrainian anthem, for which the audience rose as one, was a powerful and deeply emotional occasion.

And so to Swan Lake. Muntagirov was to have been partnered by Marianela Nuñez as Odette/Odile, their interpretation of the roles at the 2018 premiere of this production a spine-tingling performance against which all others will inevitably be measured.

With Nuñez away sick, Yasmine Naghdi stepped in at short notice. Lithe, with a powerful jump and in total control of her technique, Naghdi is a suitable Odette, the character’s gentle melancholy conveyed through the slow, elastic unfolding of her limbs. 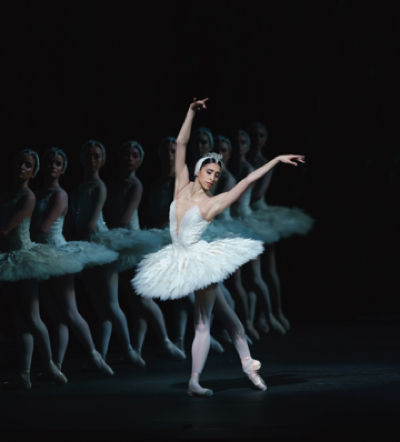 Yasmine Naghdi as Odette in Swan Lake, The Royal Ballet © ROH. Photo: Bill Cooper
Her Odile, though, is a cypher. Not sexy, not malevolent, not powerful, it’s hard to see how she would have Siegfried so comprehensively fooled, and Muntagirov’s Siegfried wasn’t convincing as a man bewitched.

Tall, with the bearing of a danseur noble, throughout the ballet’s four acts Muntagirov was his usual stunning technical dancer, his jumps soaring, his landing as silent as a cat’s, his movements flowing with rare elegance, and his partnering always safe and attentive. However, the lack of chemistry with Yasmine Naghdi gave his performance a distracted tone.

Reworked by the late Liam Scarlett based on the Petipa/Ivanov original, with sumptuous designs by John Macfarlane, this Swan Lake has much to comment it. Act I, set in the lush Palace gardens during the Prince’s birthday party, is a flurry of harmonious dancing, with the ensemble doing full justice to Scarlett’s busy, yet well-defined choreographic patterns, and James Hay a delight to watch as Siegfried’s friend Benno.

In the white Act II, set in a darkly lit, inhospitable lakeside framed by jagged rocky masses, the full complement of 24 swans were drilled to perfection.

Act III, set in the Palace’s ballroom with its marble columns and massive gilt throne, was were things fell apart rather, with the Spanish dance particularly awkward, the four men and one women looking uncomfortable, stiff and crowded in their heavy burgundy velvet costumes.

Other national dances, though not the Neapolitan, fared better; but structurally this act lives or dies by the Black Swan pas de deux, and this time it didn’t quite live.

Conducted by Koen Kessels, the orchestra was in fine form, providing a cogent reading of Tchaikovsky's wondrous score.