True, the cast for the first night of this second run of the ballet in the current season was not as originally scheduled, Natalia Osipova and Reece Clarke having been forced into isolation; but did we feel short-changed? Not a bit of it – we were treated to a performance where everybody, from named characters to ensemble, danced as if their lives depended on it. It was a glorious occasion.

Royal Ballet principals Federico Bonelli and Marianela Nuñez had danced Romeo and Juliet many times before, but never together. You wouldn’t have known from this performance. Coached by one of the most memorable Juliets of all time, Alessandra Ferri, they gave a passionate and all too credible account of the young lovers’ heart-rending story.

A ballerina couldn’t wish for a more reliable partner, nor a young woman a more besotted lover. A tad unsteady in his ballroom solo, Bonelli came into his own in the balcony pas de deux, his masterful partnering allowing Nuñez to dance with seemingly reckless (but, of course, perfectly controlled) abandon. 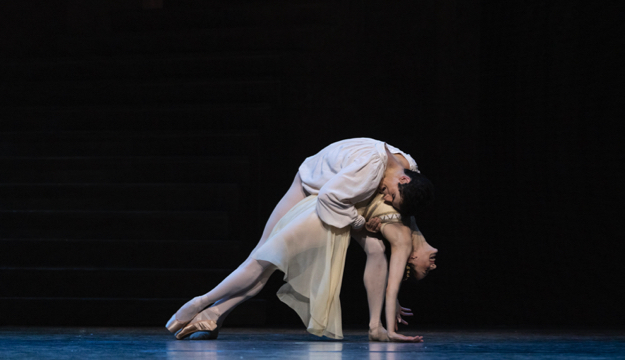 Federico Bonelli and Marianela Nuñez in Romeo and Juliet. Photo: © ROH 2021 Andrej Uspenski
Nuñez’s account of the role is detailed and rich in nuance. When she first meets Paris, the nobleman she’s supposed to marry (a sullen Thomas Mock), she is interested, if shy, and she is happy to go through the motions with him at the ball until she meets Romeo. Then her dancing becomes infused with meaning, and from the moment Romeo first touches her, she soars.

From then on Juliet drives the plot in a fevered, impulsive rush of emotion that inexorably pulls the audience into the story.

But MacMillan’s Romeo and Juliet is about more than just the two lovers. Nicholas Georgiadis’s sumptuous sets and costumes transport us to Renaissance Verona, and the corps de ballet brought to vibrant life its riotous streets and noble palaces.

Marcelino Sambé made an unscheduled appearance as Mercutio; a typically rousing performance as a hot-headed young man for whom life is not meant to be taken seriously. When he joined the courtly dances at the Capulets' home, there was more than a hint of mockery in his little smile and slight tilt of the head.

A revelation was first artist Téo Dubreil’s Benvolio. Tall, elegant, technically proficient and a convincing actor, Dubreil was more than a match for principals Bonelli and Sambé in the three friends' pas de trois – definitely one to watch.

The only downer of the evening was the normally reliable Royal Opera House Orchestra: its tempi erratic, its brass section lamentable, it turned Prokofiev's score into an occasionally painful racket. Whether that was the result of Covid ravages or unfamiliarity with conductor Alondra de la Parra, we couldn’t tell, but it was enough to detract from the star-rating of this review.

Romeo and Juliet is in repertoire at the ROH until Friday 25 February with a variety of casts.
Marianela Nuñez and Federico Bonelli dance the title roles on Thursday 13 January and Tuesday 1 February