In her choreographic debut, ENB artistic director Tamara Rojo recreates Raymonda, one of the jewels of Russian classical ballet

Raymonda, English National Ballet, Coliseum Raymonda, English National Ballet, Coliseum Teresa Guerreiro
Raymonda is one of the jewels of Russian classical ballet. A three-act work premiered in 1898 in St Petersburg, it was the result of a close collaboration between choreographer Marius Petipa and composer Alexander Glazunov, who produced an exquisite score. The version performed today in many theatres across the world is derived from the 1948 Kirov Ballet revival.

Set in Hungary at the time of the Crusades, its basic story is that of the titular young noblewoman Raymonda, who's engaged to be married to the Crusader Jean de Brienne, but catches the eye of the dastardly Saracen Abderakhman, who will not take 'no' for an answer and tries to kidnap Raymonda, in reality not as uninterested in the exotic man as she protests… Obviously, Jean de Brienne arrives just in the nick of time, Abderakhman is dispatched and we segue into Act III for a sumptuous wedding feast.

Of late, though, Raymonda has fallen foul of some Western sensitivities, and it's not difficult to see why. The Crusades have been re-evaluated, and the frankly racist portrayal – caricature, rather – of Abderakhman can be cringe-making.

However, the score and Petipa's original choreography are a marvel. What to do? Some companies, like The Royal Ballet, have resorted to just dancing Act III; but now English National Ballet under Tamara Rojo is going in a completely different direction: Rojo has decided to take Raymonda for her first foray into choreography and stage direction, and is presenting a complete remake of the story.

Rojo takes her inspiration from Florence Nightingale and the women who supported the war effort in Crimea. 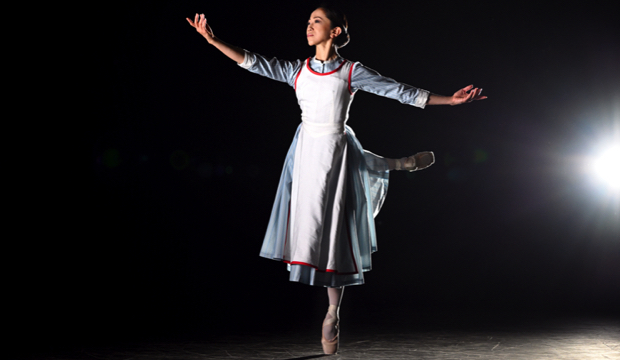 Erina Takahashi wears Raymonda's nurse costume designed by Antony McDonald for ENB's Raymonda. Photo: © Laurent Liotardo
Her Raymonda is set in 1854. Her eponymous heroine runs away from her comfortable life to become a nurse in the Crimean War. There, she becomes engaged to a soldier, John, but soon develops feelings for his friend Abdur, a leader of the Ottoman army. I wonder, who will she marry in the end?

Rojo wanted to present a story that would speak to modern audiences, by portraying Raymonda as a woman of courage, who is in charge of her own destiny; but still using Galzunov's score and relying to a large extent on Petipa's original choreography.

It's a daring proposition – it won't be long until we can judge for ourselves whether it works.