Tatiana (Natalia Osipova) is an awkward bookish girl, who falls head over heels for the arrogant Onegin (Reece Clarke), when he visits the country home where she lives with her flighty sister Olga (Francesca Hayward), as a guest of Olga’s fiancé, Lensky (Matthew Ball). 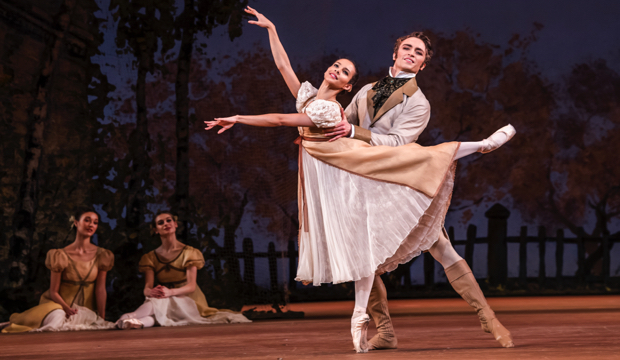 The Royal Ballet, Onegin: Francesca Hayward as Olga, Matthew Ball as Lensky. © ROH 2020 Tristram Kenton
Her hopes are dashed and her humiliation profound when Onegin not only returns, in pieces, a love letter she wrote him, but, invited to Tatiana’s birthday party, uses the occasion to flirt shamelessly with Olga.

His honour in question, Lensky defies Onegin to a duel, and is killed.

Act III takes place years later, when a wiser Onegin attends a party at the palace of Prince Gremin (Gary Avis) and finds that the girl he so cruelly treated is now a beautiful, dignified woman, the Prince’s wife. 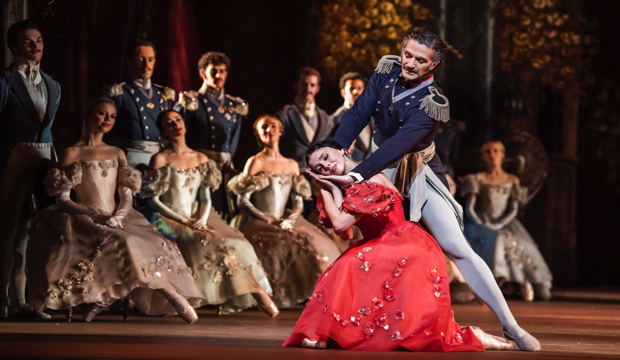 The Royal Ballet, Onegin: Natalia Osipova as Tatiana, Gary Avis as Prince Gremin. © ROH 2020 Tristram Kentonsutat
A repenting Onegin tries to win Tatiana back, but though still in thrall to her passion, duty prevails and she spurns him.

Cranko was a masterful narrative choreographer, and in Onegin he crafted deep, complex, evolving characters that offer a meaty challenge to their interpreters.

The first sustained pas de deux between Tatiana and Onegin comes in Tatiana’s dream, and is an expression of her longing for his love and, in Osipova’s interpretation, very much his body. Here, Onegin is no more than a cypher, a projection of her desire; the yearning duet is driven by Tatiana.

Not so the final pas the deux, when a repentant Onegin, now very much a rounded character, tries to win Tatiana back. Tatiana struggles with passion and duty, her body irresistibly pulling towards his, even while her spirit says ‘no’.

Reece Clarke, newly promoted to first soloist and making his debut in the title role, is a near-perfect Onegin. Tall and dark, his saturnine good looks suit the part, though he might perhaps lose some of his exaggerated stiffness of back and head in Act I.

His control of Cranko’s fiendishly difficult choreography is superb, his trim, black-clad body and long legs producing harmonious lines, fine turns and effortless balances. And, all stiffness forgotten, he acted his despair in the final pas de deux in a convincing and affecting manner.

Except for a rather over-feverish letter-writing in Act I, Osipova toned down her more histrionic instincts and produced a well-judged progression from innocent girl to dignified woman, her impetuous dancing particularly effective in the struggle to resist the man she still loves, out of duty and affection for her doting husband.

For all that they danced well together – and Reece Clarke is a wonderfully strong and safe partner, making short work of challenging lifts – there didn’t seem to be a lot of chemistry between them. Perhaps it’ll develop in future performances, as their partnership gels.

Gary Avis danced Prince Gremin as the besotted older husband, delighting in showing off his wife, and Francesca Hayward was a wonderfully careless, happy-go-lucky Olga, whose recklessness unwittingly caused her fiancé’s death.

Matthew Ball danced with his customary ease as Lensky, his earthiness providing an effective contrast to Onegin’s darkness.

Jürgen Rose’s elegant and detailed designs offer a strong sense of place, from the autumnal hues of the garden of Tatiana’s country home to Prince Gremin’s elaborate palace, with its massive chandeliers and gilt trimming, the dancers at the ball clad in soft pastel colours.

The Orchestra of the Royal Opera House under Valery Ovsyanikov offered a cogent rendition of Kurt-Heinz Stolze’s score, assembled from a variety of Tchaikovsky pieces.

READ OUR INTERVIEW WITH THE NEXT ONEGIN, RYOICHI HIRANO, HERE 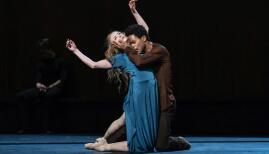 The Royal Ballet, The Cellist/Dances at a Gathering review 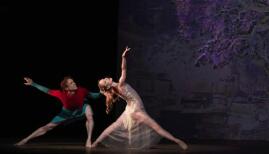 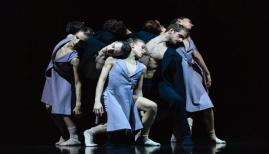