Kenneth MacMillan’s Manon, an engrossing tale of love, greed and tragedy, is as fresh and cogent as ever, and a powerful opener to The Royal Ballet’s new season

4 CW readers are interested
The Royal Ballet, Manon review 4 The Royal Ballet, Manon review Teresa Guerreiro
Manon is one of Kenneth MacMillan’s most uncompromising works. Based on a novel by Abbé Prévost, which excoriates the corruption of mid-18th-century France, MacMillan and his designer Nicholas Georgiadis graphically depict the glaring contrasts between the ostentatious riches and abject poverty existing cheek by jowl in Paris.

Manon starts on a bustling Paris street, where the very rich suss out the prostitutes, while trying to dodge the persistent attentions of beggars and thieves. As we meet Manon’s brother, Lescaut, a small-time crook and wheeler-dealer, he’s trying to pimp out his own mistress to the very rich Monsieur GM.

In this season’s first cast Lescaut is danced by Ryoichi Hirano. A dancer with a noble and elegant demeanour, Hirano is not a natural Lescaut; but he takes to the role with gusto and makes the prolonged drunken scene of Act II very much his own. He is well matched by Itziar Mendizabal as his worldly and endlessly patient mistress.

Manon arrives fresh from the countryside and on her way to a convent. As delineated by MacMillan’s meticulous choreography, Manon is a complex character: dazzled by the city and first love when she meets the penniless poet Des Grieux, but dazzled above all by the promise of riches dangled before her by Monsieur GM.

On press night Sarah Lamb was Manon, Vadim Muntagirov Des Grieux. Both possessed solid technique and harmonious lines, and their challenge is how to interpret these characters, so full of intense and often contradictory emotions. 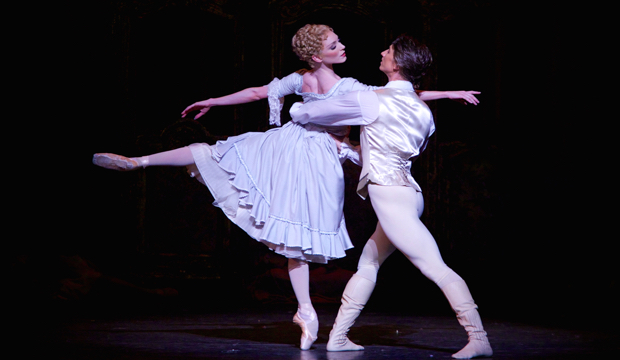 Manon, Sarah Lamb as Manon, Vadim Muntagirov as Des Grieux © ROH Alice Pennefather 2014
Manon must be passionate yet shallow, too easily seduced by furs and jewels. She must fascinate the audience without eliciting love. That Lamb does, though in her first pas de deux with Des Grieux, set in his lodgings after their love has been consummated. She could perhaps show a little more abandon, the chemistry between herself and Muntagirov not quite there, for all that his faultless classical lines are breathtaking and his partnering ardent.

Lamb does, however, grow into the role. In Act II, set in a high-end brothel, Manon is cold and imperious, aware of her status as Monsieur GM's prized possession; and Lamb conveys the inner turmoil created by Des Grieux appearance there.

Their second major pas de deux, back at Des Grieux’s lodgings after Manon has agreed to run away with him, is like that of Act I seen through a distorting mirror. Lamb portrays a Manon despoiled: in love as much with Des Grieux as with the glittering bracelet given to her by her rich lover.

In the harrowing final act, set in the swamps of Louisiana where the lovers have been deported, the Lamb/Muntagirov partnership comes to full fruition. Now Lamb finally earns our pity as the dying Manon, feverishly throwing herself into Des Grieux's arms in a vain effort to cling to life.

Muntagirov's portrayal of helplessness and grief is totally convincing; and his partnering in this, one of MacMillan’s trademark unconventional, highly physical and reckless duets, is simply superb.

The Royal Ballet ensemble – thieves, prostitutes, bourgeoisie – were in fine form; and so was the Orchestra of the Royal Opera House, delivering Massenet’s sweeping score under Koen Kessels' assured baton.