In his 1966 Concerto Kenneth MacMillan responds to the rhythms, intricacies and playfulness of Shostakovich’s Piano concerto No 2 in F major, Op 102. It’s a joyous work, its upbeat energy highlighted by designer Jürgen Rose’s simple costumes: bright orange for the soloists, lemon yellow for the corps de ballet, and deep red for the three couples that shadow the soloists.

First soloist Anna Rose O’Sullivan and newly minted principal Marcelino Sambé danced the First Movement, Allegro, with brio, making light of its fast footwork and soaring in the many grand jetés, even if the ensemble sometimes fell short on the required coordination.

The second movement, Andante, was inspired by one of MacMillan’s most influential muses, Lynn Seymour, and brings a complete change of mood. Here a couple, on press night principal Lauren Cuthbertson and soloist Reece Clarke, danced a lyrical pas de deux based on class work, the tall, elegant Clarke offering steady support to the lithe, unhurried movements of his ballerina. 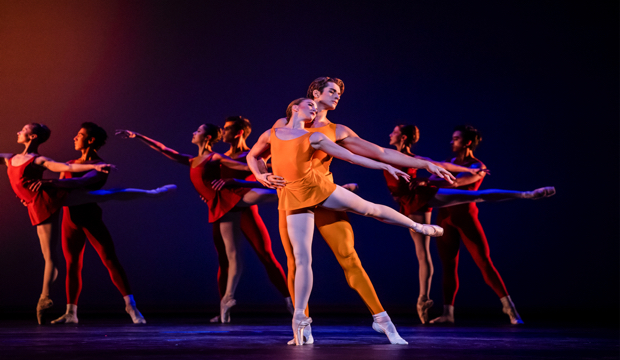 The Royal Ballet, Concerto, Lauren Cuthbertson and Reece Clarke. © ROH 2019 Tristram Kenton
It’s a moment when time stops; but the buoyant mood is restored in the final Allegro movement, where the gusto and pinpoint accuracy of Fumi Kaneko’s solo work is framed by a large ensemble now tackling the increasing speed of the score with enhanced confidence.

Frederick Ashton’s 1968 Enigma Variations is in glaring contrast to Concerto. Set to Elgar’s musical variations of the same name, and bathed in the golden light of an idealised English countryside, it is a wistful work detailing an imaginary occasion in the life of the composer when he and a group of friends spent time in his Worcestershire home. 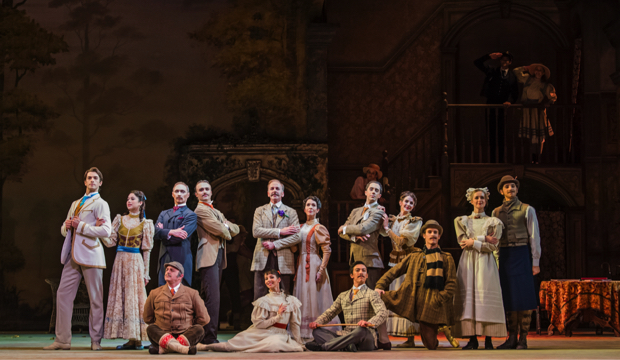 Artists of the Royal Ballet in Enigma Variations. © ROH 2019 Tristram Kenton
Royal Ballet dancers take to Ashton as easily as breathing, with Laura Morera as Elgar’s patient and supportive wife a pleasure to watch, her soft arms, épaulement and meticulous footwork a lesson in Ashton style. Christopher Saunders was Elgar, his Nimrod variation with Bennet Gartside detailing an eloquent friendship; and Francesca Hayward, vivacious and captivating as ever as the young girl in the Dorabella variation.

And yet the variations that breathe Ashton’s profound musicality and wistfulness sit uneasily with those that verge on Edwardian music hall and show the work’s age. Enigma Variations is a deliberately backward-looking work, perhaps more of a museum piece than a living, breathing ballet.

Raymonda Act III, to music by Alexander Glazunov, was choreographed by Rudolf Nureyev reproducing almost exactly Marius Petipa’s original 1898 choreography, which he had danced in Russia.

It is a sequence of divertissements set in designer Barry Kay’s sumptuous castle hall, complete with chandeliers and large hanging images of orthodox icons. Glittering costumes in white and gold denote the celebrations of Raymonda’s wedding to the crusader Jean de Brienne after a series of complicated plot developments in Acts I and II, which we don’t need to know to enjoy the spectacle of Act III.

Often performed on its own, Raymonda Act III, with its famous pas classique hongrois for eight couples, offers a combination of character ensemble work and a series of classical solo variations; and a regal pas de deux for the central couple, danced on press night by the glorious partnership of Sarah Lamb and Vadim Muntagirov.