Prepare to have your mind blown… and then some. As you enter the Barbican Gallery, which hosts Michael Clark: Cosmic Dancer, your senses are immediately assaulted by a cacophony of sound, colour and movement.

It comes from the first exhibit: a truly immersive installation especially created by the pioneering filmmaker, video artist and long-term Clark collaborator Charles Atlas. On a number of different-sized screens, some very large, some the size of a TV set, some suspended high above, some at eye level, and running the length of the gallery, Atlas has created a collage of sound and moving image that transports you to a different time, where everything seemed possible.

If you wondered how an exhibition in an art gallery could possibly do justice to an artist whose very essence is movement, Michael Clark: Cosmic Dancer is your answer.

It goes a long way towards illustrating Michael Clark's impact on British dance. Fresh out of the Royal Ballet School, a ballet graduate of rare elegance with the face of an angel, a glorious classical line, and feet any ballerina would kill for, he abandoned his first job with BalletRambert and chose instead to plunge headlong into the heady punk culture of 80s Britain, with its queer subculture. 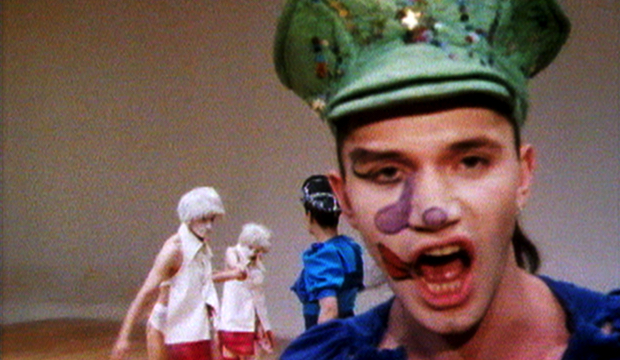 Michael Clark in Charles Atlas's Hail the New Puritan, 1986 © Charles Atlas, courtesy of the artist and Luhring Augustine New York
In collaboration with similar-minded dancers and central figures from popular culture, such as the flamboyant performance artiste and costume designer Leigh Bowery, and the punk band The Fall, the young Michael Clark burst onto the dance scene with works that were in equal measure iconoclastic, outrageous, vibrant and exhilarating. He challenged all the established notions of Margaret Thatcher's Britain, notions of gender, sexuality and conformity.

Much of this comes across in Atlas’s installation, an exercise in controlled anarchy that mirrors Clark’s 80s work: his dancing, his night-long clubbing and drug-taking, all surrounded by collaborators and acolytes in ever-more-outrageous costumes, including a giant sequined phallus worn by Bowery.

It’s quite hard to drag yourself away from this section; but you must, because what comes next complements and in some ways pulls apart and clarifies Atlas’s deliberate jumble.

In the room entitled The Fall, amid huge props denoting the consumerism of the age – cans of baked beans, a massive burger, a bag of chips – you can see the music video of I’m Curious, Orange, where the dancers share the stage with the band and the aforementioned props. It was shot by the artist Cerith Wyn Evans, then a young avant-garde film-maker. 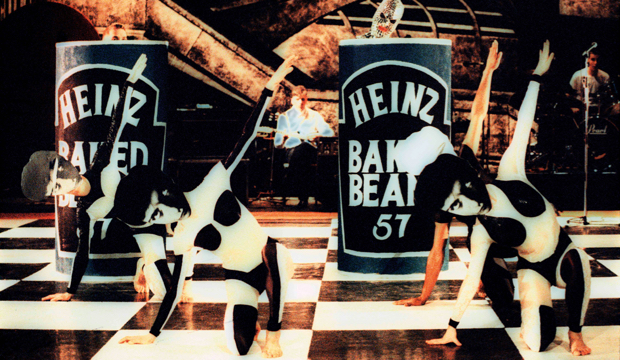 Michael Clark Company and The Fall in I am Curious... Orange

Very telling, too, is a long interview between Michael Clark and the Scottish broadcaster Muriel Gray. Clark was born in Scotland and his first contact with dance was through Scottish dance, the rhythms and lilting quality of which, he says, still show in his choreography.

And there are also sections of still images, be it a portrait by the Scots artist Peter Doig, a room with 10 monochromatic works by the German artist Silke Otto-Knapp, inspired by moments from Clark’s works, or a collection of posters and programmes that provide a travelogue of Michael Clark’s performances throughout the UK and abroad.

‘I think it captures it really well within the context of what’s going on around him. It’s a great exhibition for the general public and I think there’s enough material in there, specially in the archive captions, that will interest dance lovers.’