Describing Birmingham Royal Ballet (BRB) as ‘a company committed to finding solutions to the many obstacles we face,' Carlos Acosta stepped onto Sadler’s Wells stage to present his first live programme as artistic director.

It was a momentous occasion. Sadler’s Wells had been dark since March; re-opening its doors was cause for celebration, and the enthusiastic audience reaction belied the fact that Covid-19 restrictions meant only 30 per cent of seats could be filled.

Nor was Acosta happy to cobble together a programme made up of old bonbons. On the contrary: he commissioned a new work, Lazuli Sky, to be performed alongside works by two choreographers new to the UK. All this to live music played by the Royal Ballet Sinfonia.

Lazuli Sky, which had its world premiere at Birmingham the previous week, was the star of the show. Choreographed by the ever-inventive Will Tuckett to a score by the American minimalist composer John Adams, Shaker Loops, it assembled a classy production team. Video design by Nina Dunn, lighting by Peter Teigen, and costumes by Samuel Wyer all coalesced to create an involving atmosphere where 12 dancers from BRB’s corps could shine.

Essentially an abstract work, Lazuli Sky nevertheless often alludes to the times we’re living through. An intense blue, lazuli was the most prized colour in Renaissance painting, and the most expensive, too, being made from ground lapis lazuli rock; it is the colour of Leonardo da Vinci’s skies.

It is also the first colour to animate the backdrop, against which we see the dancers arranged in uneven groups behind a scrim, itself animated by the projection of a shape-shifting geometric frame.

At first blank, the backdrop lights up with a blue sky, a promise of freedom which draws the dancers in. They could be dancing on a rooftop, their movements carrying long pent-up energy, breathing in their newfound freedom to Adams’ pulsating score.

For Part II the music slows down to a dreamy adage, and one by one dancers walk on wearing expanding ecru skirts that can open into vast wings, or point to Japanese screens, defining space and distance. Now, though, there is touching, as a couple perform a poignant pas de deux.

Throughout the projections subtly immerse us into a series of natural settings, now an underwater coral reef, now the tops of lush, verdant trees. Lazuli Sky is a glorious hymn to nature, and the dancers respond with tremendous commitment and sensitivity.

The programme opens with Our Waltzes by the Venezuelan choreographer Vicente Nebrada. 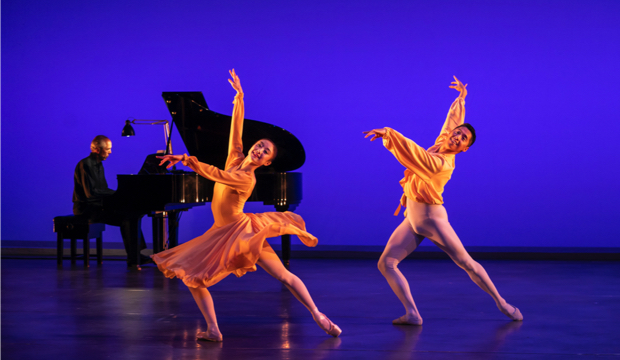 Tzu-Chao Chu ans Miki Mizutani as Orange Couple in Our Waltzes. Photo: Johan Persson
Scored for five colour-coded couples, Our Waltzes was obviously influenced by Jerome Robbins, but lacks the master’s creativity, subtlety and humour, so that although pretty enough, it’s dreadfully repetitive and runs out of things to say long before it comes to an end.

The programme’s middle piece, Valeri Panov’s Liebestod, is an eight-minute solo for a male dancer to music from Wagner's Tristan and Isolde. BRB principal Brandon Lawrence is a fine figure of a man, tall, beautifully built and a thrilling dancer, more than capable of the virtuoso leaps the piece requires. 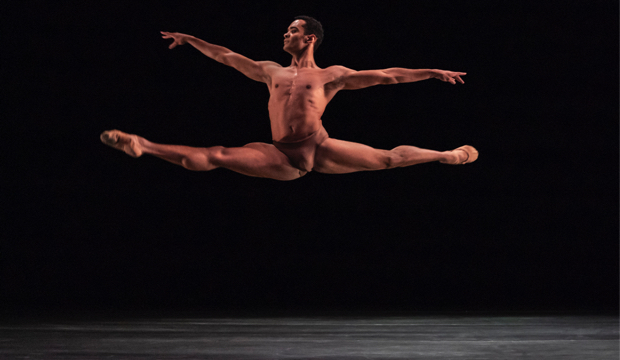 However, other than offering BRB’s excellent male principals an opportunity to shine, there seems little point to this museum piece.

No matter. Lazuli Ski alone made it all well worthwhile. Plaudits to Acosta and his company for finding solutions to seemingly unsurpassable obstacles.