The French Dispatch review 2 The French Dispatch review Ella Kemp
It’s uneasy to scrutinise an undeniable artiste of modern cinema: you sense the veiny eyes of cinephiles looking daggers. Wes Anderson is a great study, and his whimsical, colourful, symmetrical style has been imitated endlessly. He builds shots and worlds like immersive illustrations for children's books. But without an emotional core, those quaint trademarks are just marketable rolls of wallpaper.

His latest project The French Dispatch, which visualises a Kansas-based, New Yorker-type publication, is predictably and beautifully designed. But strangely, despite pretending the contrary, there's a missing heart among the nonsense. 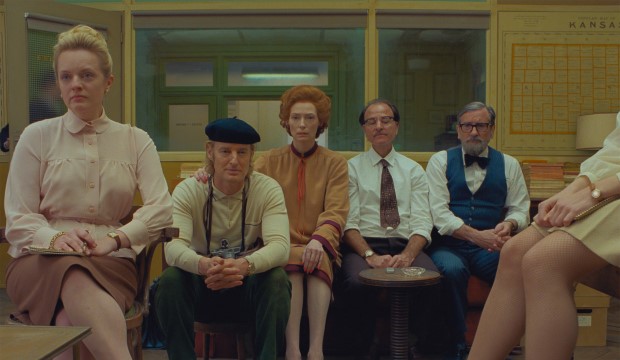 The film has everything a Wes Anderson connoisseur would crave, but unfolds in a semi-amusing tapestry that turns from curious to tedious in the first half-hour. Usually, boredom in watching movies comes from a lack of material on screen; in The French Dispatch, the opposite is true. There is simply too much to be bothered with.

The publication is tasked with bringing the world to Kansas, led by the fastidious editor Arthur Howitzer Jr (a blunt Bill Murray) who has a strict set of standards. The most important rule? No crying. But he respects, protects and, in his own way, loves his writers.

The film’s structure imitates that of the magazine, proceeding through arts, politics, food, and obituaries. It unfolds as a kooky anthology of short stories, told via appealing colours, black-and-white compositions, inventive split screens and fumbling aspect ratios. Each story ends with an editorial assessment, which is met with defensive counter-criticism before a warm, satisfying compromise. 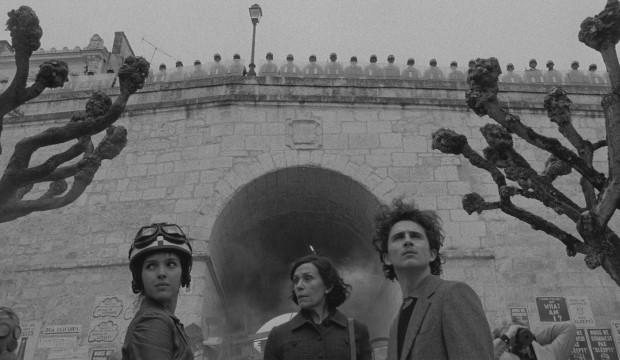 At first, it’s easy to be caught in these eccentric Wes-worlds. You relax into the silly romanticism attached to the art of writing and the pretentiousness that must follow. The scene-setting Herbsaint Sazerac (Owen Wilson) observes a day in the focal French town of Ennui with beautifully descriptive, if slightly parodic, prose (‘What sounds will punctuate the night?’). It’s a wondrous introduction, with such old-school comedy theatrics.

But the stories afterwards ebb, flow, and leave little impression aside from the meticulous visuals. They sweep into a tired void. The journos and their subjects have little to no emotional grip, aside from their famous faces and watchable performances. The Wes-worlds have always depended on bankable names, but in The French Dispatch it’s as if these stars – many of whom function as fleeting cameos – are only used to project a familiar attachment where barely any exists in the script.

There are some attractions. Who doesn’t want to see Benicio del Toro in a straitjacket and painting Léa Seydoux? Or Timothée Chalamet with shockwave hair, composing a revolutionary manifesto with Frances McDormand? Or Owen Wilson wearing a beret? But these don’t have enough narrative fuel to function with interest as main events, regardless of their aesthetic pleasures (this critic can barely recount the food section with Jeffrey Wright). As such, they turn into scattered, exhausting adventures.

Anderson labours his style so hard, drowning so deep in his own clichés, that the pretty copy inside The French Dispatch doesn't have much to say.

Reviewed at the London Film Festival 2021. The French Dispatch will release in UK cinemas on Friday 22 October.