Martin Scorsese is back with a new title, and a whole host of stars. The Irishman gives Robert De Niro, Joe Pesci and Al Pacino the roles of a lifetime

A house-painter coats walls in red splatters of blood. He’s a very specific kind of handyman who gets the job done, but there are no do-overs. Frank Sheeran is the man who paints houses in Martin Scorsese’s The Irishman, an astonishing picture that celebrates everything the filmmaker has mastered for more than four decades now.

His new film lines up the most exciting crop of Old White Men™ imaginable – making, in this instance, the overwhelming dominance of such a breed in the film industry feel utterly essential. The Irishman stars Robert De Niro, Joe Pesci and Al Pacino as the crucial leads, and brings in Ray Romano, Harvey Keitel, Bobby Cannavale and Stephen Graham in showstopping supporting roles. In terms of women, in this case it’s better to celebrate Woman, singular – Anna Paquin puts in a sturdy, sensitive performance as Frank’s daughter Peggy.

The story, based on Charles Brandt’s 2004 memoir I Heard You Paint Houses, retells the life of Frank Sheeran, a war veteran, driver and hired hitman, through his alliances with (and involvement in the disappearance of) politician Jimmy Hoffa, and the crime business of the Bufalino family. It is told by Sheeran himself, reflecting from a chair in a care home.

He’s old now, death is near – and it never fades from view over the three-and-a-half hours The Irishman runs for. The length is felt, as it must have been across the 60 years spanned by the film. When looking back on what’s been lived, it’s impossible to sacrifice even a second of it. 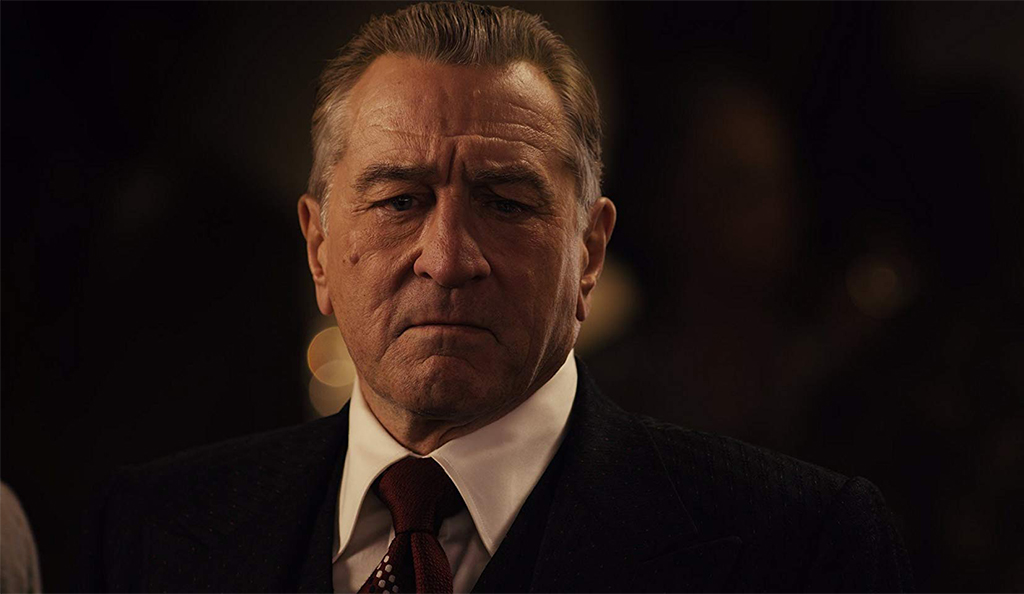 Robert De Niro in The Irishman

This is a mob film with the maturity of someone who’s been making them for over 30 years. There’s still satisfying violence, but Scorsese peppers it between understated moments. The veneer of the impenetrable movie star dissolves, making way for tangible, perishable human beings. An old man kicks a grocer; he pulls a trigger twice and skips off with a lopsided jog. These crimes are imperfect, which is what makes them believable.

Scorsese’s storytelling is seamless. To chronicle Frank’s life, he frames the entire evolving process of it, flowing from Italian restaurant to war trenches with one single harmonica melody. Much was debated about the film’s de-ageing technology, reworking the septuagenarians’ features to fit the ambitious narrative – but it works. It has the same effect as turning on a bright light in a room that had comfortably been in darkness: it’s jarring, briefly blinding, but forgotten as soon as the eyes adjust.

Technology quickly blends because the performances are so incandescent. As Russell Buffalino, Joe Pesci has the kind of stare that would shoot you right between the eyes if you dared to break it. He’s very often quiet – but the ominous intimidation of this 5ft 4in man makes him seem like the tallest man who ever lived. 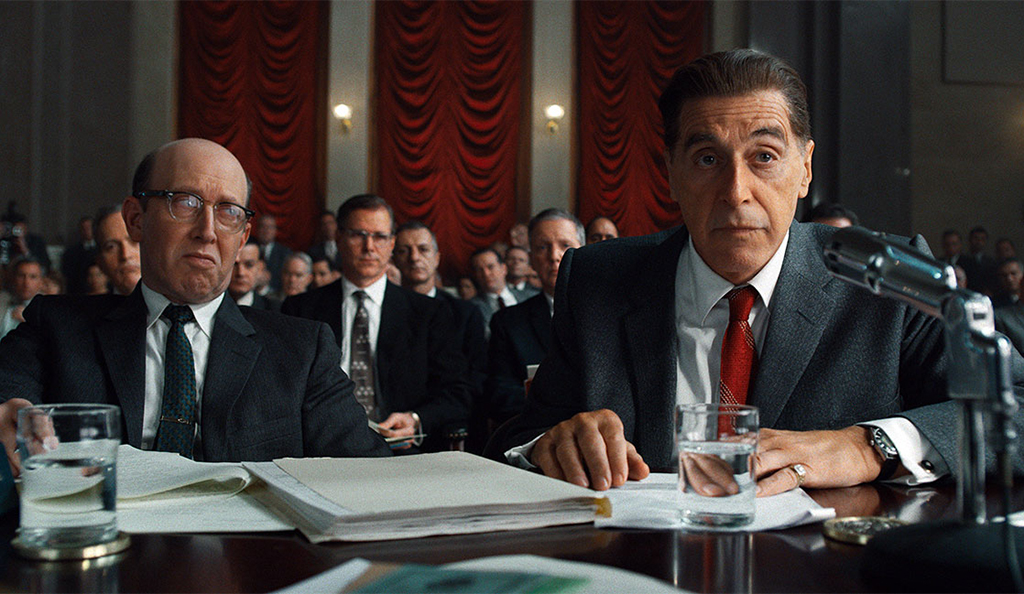 Al Pacino in The Irishman

Pacino inhabits Jimmy Hoffa with unpredictable, operatic energy. Some viewers may not be familiar with Hoffa’s story (Sheeran proves this when faced with a blank response from one of the younger nurses in the home), but here we are blessed with a raspy, riotous figure of the people, a man who loves his fellow men and values loyalty above all else.

The director’s loyalty shines in the responsibility he gives to his leading man. De Niro is a perfect hero as the film carries his name, but his performance always supports everyone else’s needs in the scene. His body expands when it needs to pounce, his eyes disappear when emotion must seep in. He’s joyous, puzzling, threatening and wholly heartbreaking in turn.

He, and every other thing lucky enough to find itself under Scorsese’s lens, is framed beautifully. As a visual product The Irishman is vivid and clean, as if no movie had actually been so completely accomplished until now. Has a camera ever moved with such urgency? Do silences always sound so dangerous? Scorsese assembles magnificent, sharp images of sparse chaos – a grid of yellow taxis on fire, a cloud of thick smoke billowing at night.

Poetry translates emotionally too, and this reflective thread is what guides The Irishman to such impressive heights.There’s no fanfare when Hoffa and Sheeran tell each other bedtime secrets about the men they’re scared of. So much of the film listens to the fears and regrets of these tough guys – laying every diagnosable anxiety bare to exorcise it before the end comes.

So fast and for so long, we crave the attention of these men, and miss them as soon as they’re gone. There’s a clever line that winks to anyone listening, as this life nears its close. 'You don’t know how fast time goes by until you get there,' Frank says. Is he talking to his confidant in the home, or is this person now you?