Andrew Garfield, Liam Neeson, and Adam Driver star in the new epic drama directed by Martin Scorsese. Silence has conviction, but feels like it's preaching to the choir

The question has to be asked because the two films differ so much subject and intention while differing so little in method and outcome. Martin Scorsese’s last film – the 2013 biopic of corrupt stockbroker Jordan Belfort – was an unapologetic celebration of hedonistic individualism, and its intention was pure cinematic pleasure; Silence – the story of a Portuguese Catholic priest acting as a missionary in 17th Century Japan – is a religious appreciation of transcendental selflessness, and its apparent intention is cinematic mortification. (Marty asks: how much suffering can a man take in the name of his faith? But also: how long can an audience sit still when not much is happening onscreen?)

The films represent are opposites – profanity and piety, wolf and lamb ­­– but onIy as opposing sides to the same heavy coin. Both show the ‘journey’ of a young man who ends up falsely repentant, only superficially renouncing his true vocation while remaining resistant to inner change. To doubt is to capitulate. These are films with their minds already made up.

Sebastião Rodrigues (Andrew Garfield) and Francisco Garrpe (Adam Driver), two Portuguese Catholic priests, are deeply concerned by the rumour that Father Cristóvão Ferreira (Liam Neeson) has apostatised, and now lives in collusion with the godless Japanese whom he went over to convert. Through sheer earnestness they browbeat their superior (Ciarán Hinds) into letting them make the arduous journey to Japan, where they plan to redress any potential sacrilegious influence and find out what has happened to Ferreira. 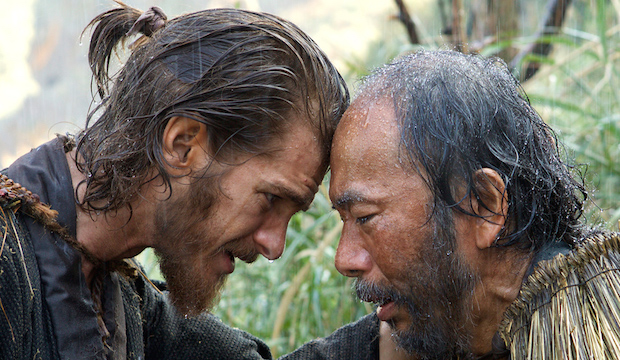 Their arrival and adjustment constitutes the first act, which is the best part of Silence. Hiding out in the mist-shrouded coastal village, secretly performing rites for the cowering populace and witnessing their persecution by government agents, Rodrigues and Garrpe are damp and wild-eyed, blanched by culture shock and fervid with the chance to properly spread the Word. Then circumstance leads them to go their separate ways, and this is where Scorsese’s film becomes less interesting when it needed to become more interesting.

Part of the problem is that the narrative follows Garfield’s character rather than Driver’s. Garfield is a perfectly competent actor, underrated as a comic one but overrated as a dramatic one: his performance in Silence squeezes out pathos in the same way as he did in The Social Network (acting disbelievingly betrayed) and Never Let Me Go (disbelievingly disabused). His character never really expresses internal conflict any more convincingly than Leonardo DiCaprio’s did in Wolf.

At one point the two priests cross paths again, although only at a distance. It’s hard to see Adam Driver’s hunched skeletal frame on the horizon and not wish that the cameras had followed him instead. He practically played a monk in Paterson, and gave that film a subtlety that Silence lacks.