Palestinian director Maysaloun Hamoud ruffled some feathers in the Middle East with her debut feature but, controversy aside, In Between is accomplished, poignant and, at times, genuinely empowering

In Between film review 4 In Between film review Daniel Lewis
In Between uses a (now) pretty familiar dramedy formula – a small group of women battling life and love in the city. Think Sex and the City or Girls. Unlike the characters in those shows, though, the women in this film – three Arab Israeli-Palestinians women sharing an apartment in central Tel Aviv – don’t have the luxury of floundering and flourishing in a liberal bubble. Their efforts to forge their identities and sense of independence has to compete with traditional beliefs and values pushing in the opposite direction.

On the surface, the story seems predictable. Nour (Shaden Kanboura), a Tel Aviv University student of computer science from a conservative Muslim background, moves in with Salma (Sana Jammelieh), a DJ from a Christian family who’s gay, and her friend Layla (Mouna Hawa), a criminal defence lawyer from a secular Muslim background.

The stage seems set for a conflict between Nour and her new flatmates, who spend most of their evenings partying hard with Tel Aviv’s hip/underground/bohemian crowd. But instead, the three women end up bonding under the pressure of a strictly patriarchal society preoccupied with how they dress and act and speak and even eat.

Nour is being trapped by her outwardly pious fiancé who is in fact a religious hypocrite of the worst (and depressingly common) kind. Salma is struggling to conceal her sexuality from her family who are still introducing her to potential husbands. Layla pursues a relationship with a Jewish film student who turns out not to be as liberal as he seems.

In Between’s careful teasing out of its themes of racism, sexism and homophobia is skilful and subtle and the performances are convincing – Mouna Hawa is particularly compelling as the intelligent and flirtatious Layla. But, at certain points, you wish the film could be as dynamic as its protagonists. With a bare bones soundtrack, it can sometimes come across overly quiet. Nevertheless, in the air-punching empowerment moments, it’s hard not to root for these characters as they shake off these various deadweights – even if it leads them back to square one. 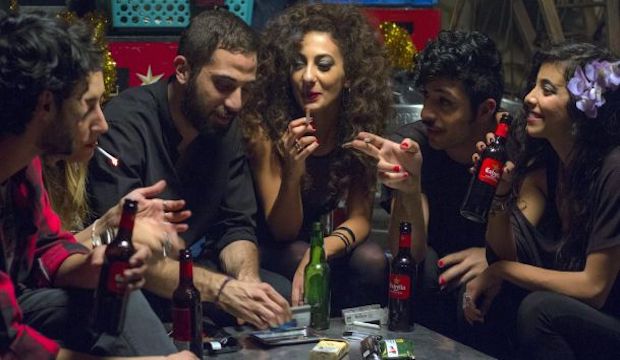 Unfortunately, in director Maysaloun Hamoud’s native Israel, this film won’t be seen by just the people who probably need to see it the most. The film has blazed on a trail on the international film festival circuit, winning three awards in San Sebastián, but it has been declared haram (Arabic for ‘forbidden’) by the mayor of Umm al-Fahm, Nour’s devout hometown, and it’s likely other communities will follow suit. Hamoud has also earned official death threats.

But perhaps this controversy will draw more people to the cinema to see this film and to take part in a vital conversation about the significant everyday fight for personal – female – freedoms. Here's hoping.