His monthly visit to see his son Shingo is coming up, but he’s short on cash for child support (and the bills, and the rent). His own father, who had similar failings to himself, has just died and left behind only lottery tickets and pawn-shop stubs. So we follow Ryota around as he tries every trick he can think of to rustle up the money before ex-wife Kyoko cuts him out of their lives completely.

That’s all there is to the plot as such. A slice-of-life story of a divorced father, a da·me·nin·gen ('Useless human being') who can’t make ends meet but still wants to remain a part of his son’s life, while his former wife tries to move on and build the best possible life for her child ('Grownups cannot live with love alone', she tells him when he finally finds a moment alone with her). While he’s slippery and dishonest, Ryota means well. Visually, the film is conventional, but the writing is nuanced and funny. Ryota’s mother continuously deploys fabulous quips about old age and her family. She describes Ryota as having only one talent, although she’s always changing her mind about exactly what it is. Some mothers do ‘ave ‘em.

There’s some great thematic exploration, with powerful ironies deployed throughout; Ryota’s agency primarily investigates divorce cases, and his young partner, himself from a broken home, treats him with unexpected patience and kindness. Halfway through the film, Ryota’s publisher asks him to write a scenario for a comic book series about gambling, his editor having recommended him as an expert on the subject. Ouch. The universe has handed him the solution to all his problems, but he wrestles with his pride for the rest of the film. 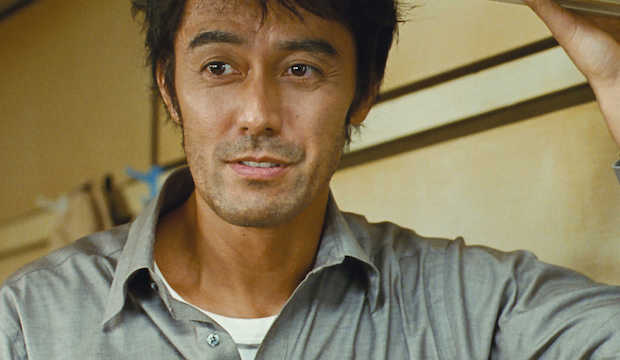 The film also explores the difficulties of becoming ‘the man you want to be’ (the Japanese have a very strong culture of childhood dreams that doesn’t sit comfortably alongside the crushing realities of their adult work lives). Back in high school, Ryota wanted to become a civil servant, but he became a novelist instead. Poor bastard.

It also looks at what is passed down from father to son. Ryota and Shingo both want to be different from their fathers, yet all three generations enjoy the thrill of a lottery ticket. All three also show hints of literary talent.

The film is elegant, understated and surprisingly deep, taking a difficult, potentially uncomfortable subject and keeping it light and enjoyable without trivialising it. Our characters, their conversations and situations, and the realisations they come to all feel well-observed. After the Storm does not delude us with some miraculous reconciliation, but concludes on a note of acceptance that feels very satisfying.