3 CW readers are interested
Black Widow review 3 Black Widow review Ella Kemp
Although we’re approaching a hesitant emergence out of lockdown, things continue to be messy. With numerous delays, especially in the film industry, it's even messier. Cate Shortland's solo Marvel movie Black Widow adds to that confusion in more ways than one, albeit with enough CG action to keep you half-entertained.

Originally slated for last year, Black Widow is the first release from the Marvel Cinematic Universe (MCU) after Covid shut everything down. The story follows the auburn-haired Avenger Natasha Romanoff (Scarlett Johansson) and examines her whereabouts between Captain America: Civil War (2016) and Avengers: Infinity War (2018).

It’s a convenient (if perplexing) way to resurrect a much-loved character who died in Avengers: Endgame (2019), the film that concluded the MCU's ‘Phase Three’ cycle. Exacerbating the sense of time even further: despite taking place during Phase Three events, Black Widow is actually igniting the new Phase Four cycle. Honestly, this critic won’t blame you for giving up here. 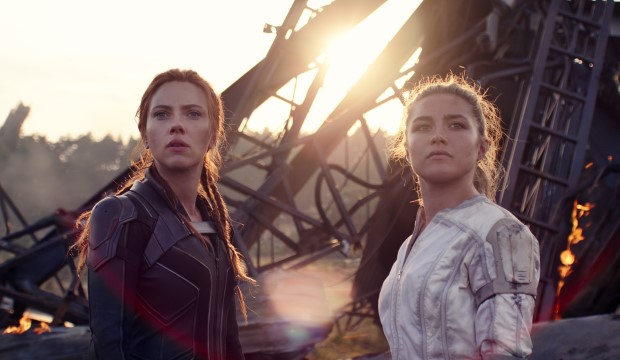 Thankfully, aside from a few references and keywords, its baffling placement in the franchise doesn’t matter too much. You get the gist and enjoy the action. Natasha is now on the run. The film starts with her growing up in a fake family parented by Russian agents, Alexei (David Harbour) and Melina (Rachel Weisz). They masquerade as a suburban American family in 90s Ohio.

The two ‘daughters’, Natasha included, were then raised as ‘Widows’ in the Red Room program. This was designed to create female assassins, trained and brainwashed by the misogynistic Dreykov (Ray Winstone, with a disorienting Russian accent). The frightening process is shown in a gloriously gritty title sequence, which is regrettably superior to the rest of the film.

Natasha eventually tracks down her estranged ‘sister’ Yelena (a funny and scene-stealing Florence Pugh), who was inadvertently released from the Widow mind-control. With help from their, um, parents, they aim to bring down Dreykov and his Widows. 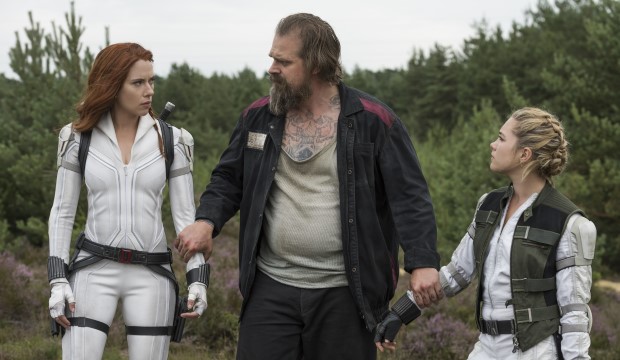 The characters move around a kind of post-post-Cold War existence, in which East and West collaborate but don’t like it. The film even has its own Marxist undertones, pushed into your nose with Alexei’s knuckle tattoos that spell out 'KARL MARX'.

It’s the little intelligence you can salvage from a movie saturated in chases, fights, explosions, and more chases – endlessly repeating and recurring without much emotion or surprise to guide them. One particularly silly scene plays like an unrevised improv: staging a mountainous prison break with a helicopter getaway and a genocidal avalanche.

It’s easy to submit and revel in all the spectacular nonsense, especially when it's projected on a tall screen with massive speakers. Black Widow is also receiving a premium Disney Plus release, but it's pointless watching this film outside a cinema. Marvel excels in these specifically cinematic experiences, even if the intrusive CGI removes much of the suspense – unlike the Mission: Impossible franchise, which thrives in being insanely practical.

Marvel also knows how to laugh at itself, which is an invaluable quality. Yelena becomes the comic relief, constantly taking the mick out of her sister for being an incredible ‘poser’. But given Florence Pugh’s incredible back catalogue as an absorbing lead (Midsommar, The Little Drummer Girl), Johansson's performance and Natasha's character feel lacklustre by comparison. Fair enough, it is Natasha's movie, but there’s nothing unpredictable about her. Superhero poses can't hide from that.

Black Widow will be in cinemas on Wednesday 7 July and is available on Disney Plus from Friday 9 July.