A Beautiful Day in the Neighborhood review ★★★★★

Following the triumphant Can You Ever Forgive Me?, director Marielle Heller returns to tell the story of beloved children's entertainer Fred Rogers

There’s a minute of perfect silence in A Beautiful Day in the Neighborhood that’s hard to forget.

The real-life children’s presenter Fred Rogers, played by a sugar-sweet Tom Hanks, is having lunch with the gloomy, cynical journalist Lloyd Vogel (Matthew Rhys), who's interviewing him for a profile piece. Spending time with Rogers’ lovingly empathetic personality causes Vogel to rethink some things in his life: chiefly his frosty relationship with his father, and his new duties as a dad himself.

Rogers tells him, over a vegetarian meal, to take a minute remembering those he loves, those who’ve shaped him. Director Marielle Heller stays in this moment and Jody Lee Lipes’s camera slowly presses closer to Rogers. The quiet ambience of the restaurant settles in. For a few delicate moments, it’s as if he’s speaking to us; daring us to think of our own loved ones. Such is the soft charm of Mr Rogers. 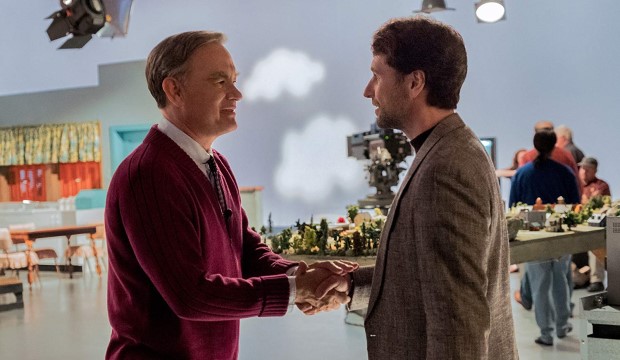 Beautiful Day, loosely based on a 1998 Esquire article by Tom Junod, not only tells a poignant tale of love and forgiveness, but seems to encourage every member of the audience to find and fix their feelings; to let go of the anger in their hearts. In the current era, which is both more enlightened and more anxious than ever, this film feels valuable and (to use Rogers’ word) special.

Tom Hanks has never struggled in his childish charm, his interview personality being something of a cartoon joker: not real exactly, but extremely affable. He sieves this into Mr Rogers, albeit with a more suppressed and sensible energy. Mr Rogers introduces the film within his movie-set home, his personality bursting beyond the 4:3 telly box frame, and soothes viewers with his honeyed words (‘It’s hardest of all to forgive someone we love’). 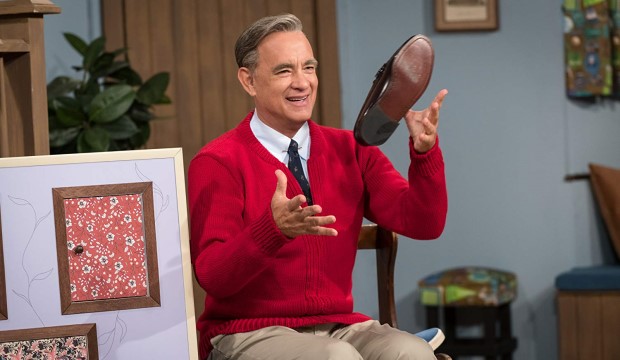 Writers Micah Fitzerman-Blue and Noah Harpster straddle a curious line between Vogel’s broken-man mentality and Rogers’ cushy, comfortable fantasy: namely with exterior establishment shots of cities, which are replaced with colourful models. After Rogers’ introduction, we see Vogel at his sister’s wedding. Their estranged but apologetic father (Chris Cooper) is also in attendance, and he and Vogel have a harsh scuffle.

These initial scenes alarm at first, since Rogers’ lovely opening monologue gives way to very functional dialogue that doesn't leave much room for three-dimensional conversation. But when the film comes to Vogel’s interviews with Rogers, leading to the pause that started this review, the words shared between them sparkle and then drift into strange directions.

Rogers is far from 'normal', and his regular dependence on old puppets might seem slightly off-kilter, but there’s never a suggestion of danger in his presence. There’s only one hint of an insult as Vogel asserts that ‘Mr Rogers’ is a character, not a real man.

Beautiful Day is like a soft-talking therapy session – not only for Vogel to improve his family life and his bleak view of humanity, but for those watching, too. Cynicism is an understandable standard, but sometimes it’s worth letting go and remembering what’s good in life. Mr Rogers leads that journey, and perhaps the viewers will exit the cinema happier than when they entered.