The Most Popular Art Exhibition Ever! review ★★★★★

He calls himself 'The Transvestite Potter', everyone else knows him as the nation's favourite contemporary artist – don't miss this Grayson Perry Serpentine exhibition

The exhibition title is irksome, brash, unsettling maybe. But it grabs your attention.

Perry has said: 'The new works I am making for this show all have ideas about popularity hovering around the "What kind of art do people like?" "What subjects?" "Why do people like going to galleries?" "Is there anything wrong with a self-proclaimed desire to be popular?" ' And yes, it seems there is.

Perry is quick to remind us that 'popular' and 'popularity' are tricky terms in the art world. Popular can still evoke notions of popularism. He gives the example that the 1937, Nazi-organised Entartete Kunst ("Degenerate Art") exhibition drew more than 20,000 people a day. He proceeds to say that popularity threatens exclusivity. Fighting to break the glass ceiling of the exclusive art world club, Perry aims to find new ways in which contemporary art can best address a diverse cross section of society. Not a simple task. The real question, then, is, has he been successful? 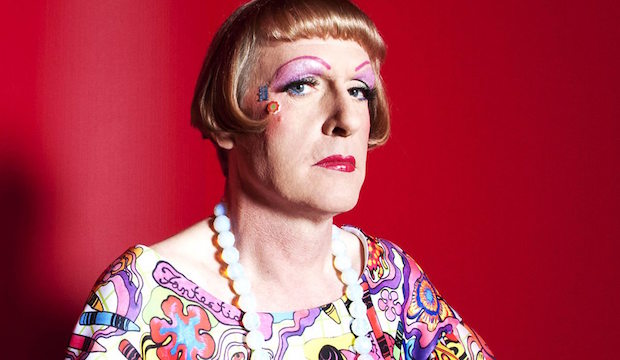 The Most Popular Art Exhibition Ever! touches on the above and Perry's favoured themes of masculinity, art itself and contemporary culture. It deals with relationships between artist, gallery, critic and audience. With a desire to challenge 'the same old comfortable ideas' which, in Perry's view, dominate British society and culture, his latest body of work sparks debate.

‘Flat whites against racism’ and ‘this art makes me better’ are lines among many that decorate the surface of Luxury Brands for Social Justice, 2017, while $100 bills and ‘for sale’ signs varnish Object in the foreground, 2016. Slagging off consumerist habits on the surface of a priceless ceramic object reeks with irony to me, but we move on to the Serpentine's main gallery without too much angst.

Dedicated to what Perry calls the Mantelpiece of Britain, the gallery’s stand-out works are a thunderous tapestry, entitled the Battle of Britain, 2017, and Matching Pair, 2017, otherwise now known as the Brexit vases.

We suppose the rainbow dominating the frame of Battle of Britain is meant to have us dreaming of pots and pots of money (thanks, capitalism!), the lingering clouds of pollution represent our selfish, live-in-the-now mentality (screw the environment for future generations), while the row of done-in terraced houses is symbolic of Britain's social inequalities. On top of all this, Perry adds a yob in the foreground, Ocado vans on the motorway, and graffiti spelling out 'Class War', 'Leave' and 'Toffs Out', to make his point even clearer. As if we didn't get it. 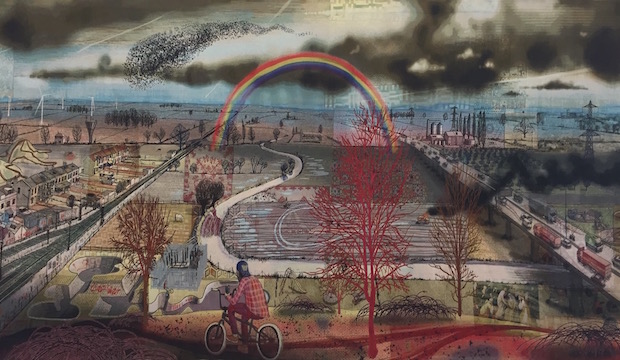 The pair of vases, however, are far more pertinent. They represent the opposing sides of the most fractious political debate in the past few years: Brexit. Decorated with images supplied by the British public, Matching Pair explores our national identity in the wake of the EU referendum.

Perry invited a group of Bremainers and Brexiteers to suggest visuals they believed defined a Remain and Leave Britain via social media. Given it has been one of the most decisive moments in recent British history, they look remarkably similar at first glance. Only on close scrutiny can you tell which one is which. A floating Farage face in a Brexit sky, and John Lewis and NHS logos provide a way in. 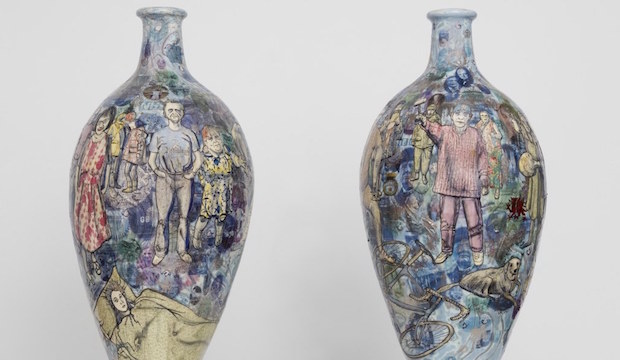 While social satire is the order of the day, more light-hearted pieces induce a much-needed sneaky smirk. Look out for Kateboard, 2017, which depicts the Duchess of Cambridge as a Madonna-esque figure on a skateboard, and Kenilworth AM1, 2010, Perry’s bespoke pop-coloured Harley-Davidson that doubles up as a shrine to Alan Measles, his teddy bear.

There’s nothing new in Perry’s social commentary. It all feels a bit samey. But you come away realising that unease doesn’t lie with it being popular or not, in the mainstream sense of the word – I hope it is, I urge you all to go – but with its layers of mixed messages tied up with accessibility and exclusivity.

Nearly every object label in the room details ‘Courtesy of Victoria Miro Gallery’. If you are not aware, Perry is represented by one of London’s most exclusive contemporary art galleries. While this exhibition is free and accessible to us mere mortals (lucky us!), we are reminded at every possible moment that bags of cash are required to actually own it. The glass ceiling still firmly in place. Despite all his efforts, Perry is no different to the rest of them. Art – and especially his art – is a luxury decorative asset to be invested in by those with money to spare.

It’s very unlikely to be the most popular art exhibition ever, and Perry's jibes are faceless, but its political timeliness – its opening coincides with the general election – makes it a forum for open debate. A little satirical light relief has never done anyone any harm. Maybe we can unite in that at least?