Come and discover the works of a late, great architectural mind at this Zaha Hadid Serpentine exhibition

Over at the the Serpentine's Sackler gallery, though, there's a body of work that will change the way you see the relationship between drawing and buildings. The late, visionary architect Zaha Hadid drew abstract, organic forms that defied the notion of buildings as solid and regimented. Visualising space, she defied arithmetical austerity, using painting and calligraphy as a design tool for imagining architecture. You can discover the wonderful freedom of her spatial designs at her very own Serpentine Sackler Gallery.

This exhibition, conceived before her death, presents Hadid's rarely seen paintings and drawings. We see the lines and forms that came to define her buildings: rippling, weightless, delicate yet defiant.

Hadid, who died earlier this year aged just 65, was a pioneer and a visionary. She was Rem Koolhaas' apprentice, an architectural powerhouse and her designs made loud, bold statements in an increasingly homogenous urban cityscape. She rebelled against the phallic, glinting skyscrapers that have come to define much of modern construction. Instead, her buildings resemble frozen ice-formations, filled with the undulating energy of a fluid paused in time. Her designs are light - weightless almost - and bound to nature: "The beauty of the landscape - where sand, water, reeds, birds, buildings, and people all somehow flowed together - has never left me", she said. Her work is everywhere: from the 2012 London Olympics Aquatic Centre and the Serpentine Sackler Gallery to that controversial Japan Olympic Games stadium design dubbed 'like a turtle waiting for Japan to sink so that it can swim away' by Japanese architect Arata Isozaki. 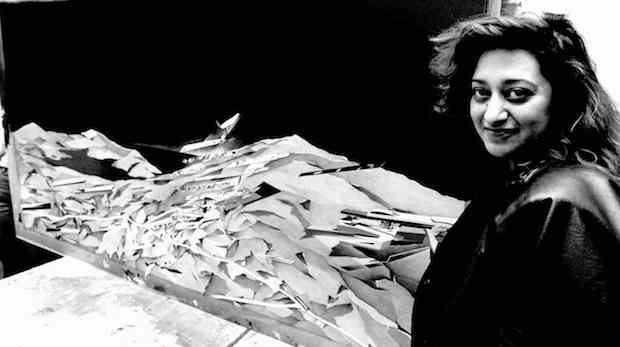 Photograph: Garry Weaser for the Guardian

The Serpentine has had a close relationship with Hadid. Her first structure in London was the inaugural Serpentine Pavilion in 2000 and in 2013 she completed the extension for the Serpentine Sackler Gallery, one of Zaha Hadid Architects’ first permanent buildings in central London.

Come and celebrate the legacy of a true artist this winter.