Manchester-born artist Helen Marten is having something of an annus mirabilis. A month after winning the inagural Hepworth sculpture prize, the 31 year old has snapped up the Turner Prize - the most important award in contemporary art.

Marten's work is difficult to pin down - her painting-sculpture hybrids bring together found objects. The judges praised: 'the complexity of the work, its amazing formal qualities, its disparate materials and techniques and also how it relates to the world ... how it often suggests meaning, but those meanings are all in flux somehow. One image, one form becomes another.'

Marten will share the he £25,000 award with her fellow nominees.

What is the Turner Prize?

It's the biggest and mst prestigious prize in British art, which turned the likes of Anish Kapoor, Grayson Perry, Tracey Emin and Damien Hirst into household names.

It's also one of the most-mocked events in the art-world. From Martin Creed's flickering lightbulb to Chris Ofili's balls of elephant dung: the prize never fails to raise an eyebrow or two. The late art critic Brian Sewell once said "The annual farce of the Turner Prize is now as inevitable in November as is the pantomime at Christmas".

Whether or not you consider it all case of Emperor's New Clothes, you can't ignore the the Turner. The 2016 exhibition has just opened - and it's a riot.

Last year, the prize was won by the architectural collective 'Assemble'. With an age range of 26-29, they were they youngest group ever to have been considered for the £25,000 prize. They're were also - and here's what caused a bit of stir - the first 'non-artists' to have won.

This year, no such controversy. All four nominees firmly in the 'artist' camp. And when you wade through the frighteningly humourless pseudo-Academia from the curators ("Marten's objects read almost as hieroglyphics, a visual system of communication that is expressive yet rooted in logic") you'll find plenty to enjoy. We've got a good crop this year - and one that sings in harmony. This is the first Turner Prize in a long time whose nominees fit so well together: all of them transcend medium, defy categorisation and are defined by contradiction. 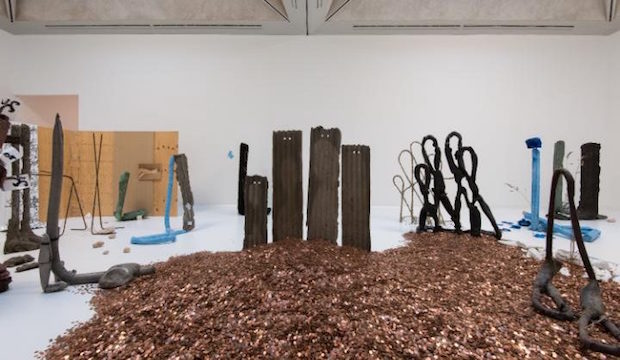 The most 'in-yer-face' work will come courtesy of sculptor (and fetishist) Anthea Hamilton. We hope she brings her 18-foot, hyperreal sculpture depicting a nude man spreading apart his buttocks (above).

Michael Dean, another sculptor, and the only man nominated, makes structures out of common urban materials, such as concrete and wire; the familiar becomes unfamiliar. Dean wants viewers of his art "to experience something as intense and personal in front of it as a kiss". We shall see, Michael. We shall see.

Photographer Josephine Pryde stages scenes that mimic the unreal fantasies found in advertising and fashion imagery. "She is fascinated by the relationship between art and photography, and by how commodities appear in different images and contexts," says the curator.