Flying fish: The Turbine Hall at Tate Modern has been turned into Anywhen, a strange indoor park with aquatic inhabitants, by Philippe Parreno

This is the Turbine Hall at the Tate Modern. It's been filled with sunflower seeds, it's been cracked in half. Now, it's carpeted, and filled with 'light, sound and moving elements'. Oh, and fish.

Many of them are stuck in the roof, or under the Level 1 bridge, like sad balloons after a disco. The Turbine Hall is very hard to fill. And this installation doesn't seem to try- there's some light effects, there's some noise. There's moving screens that rise and fall the height of the hall, occasionally configuring into a cinema-type screen where you can watch a video of a stage ventriloquist. 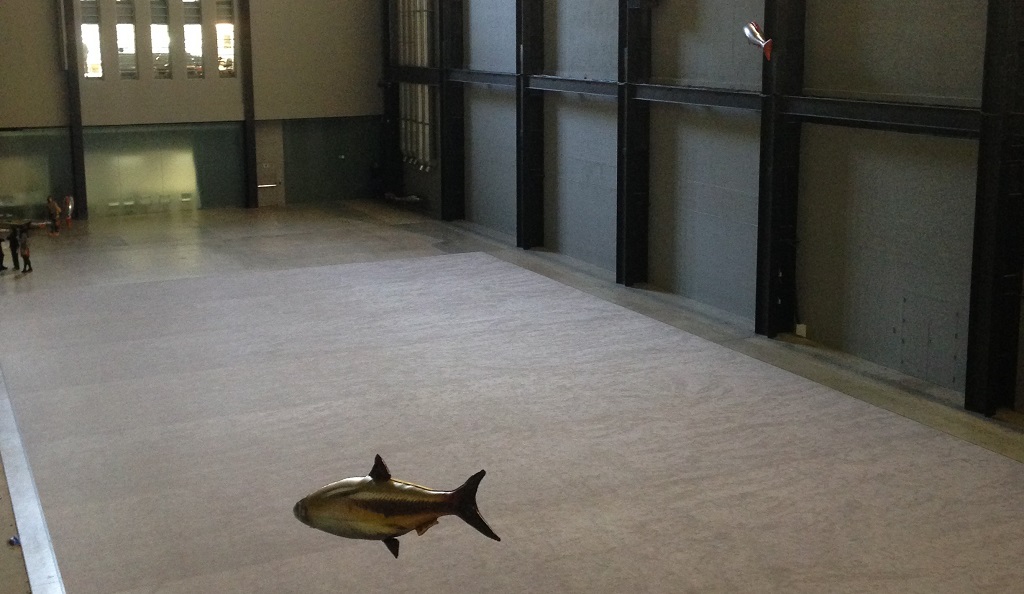 This year, the Hall welcomes French multimedia artist Philippe Parreno for the second annual Hyundai Commission. His work is called, cryptically, Anywhen (and he suggests that the name might change). Having waited to see the previous artist Abraham Cruzvillegas’ planters flourish in the last months, our waiting game is now slightly altered. Parreno has made an installation that changes throughout the day rather than over the year- in the morning, for example, things are just getting warmed up. Come back in the afternoon and the space will be different.

Working across film, video, sound, sculpture and performance, Parreno draws from a diverse pool of influences and disciplines and this work is no different. Interestingly, the effects you see in the hall are all governed by a specially designed bio reactor. That is, readings taken from a crop of microorganisms growing in the Tate will decide them. The very small informing the very large.

Parreno is no stranger to big spaces, having been the first to occupy the Palais de Tokyo in its entirety in 2013 (that's 22,000 square metres of art). For Anywhere, Anywhere. Out of this World, Marylin Monroe’s ghost drifted around, alongside the spectres of dancers from the Merce Cunningham Dance Company.

Surely, then, for the Tate, Parreno would have had a master plan to execute. According to the artist, not at all. He approached the commission with the express aim to 'not have an idea', indeed to have no statement. 'I have no idea, and I'm going to work with that.' instead the focus is on the space 'a strong presence'. And so this installation is not about anything at all. Not even about looking or anything. Just about begin there and asking the Turbine Hall to be a place to be where things might happen- like a public park. We have a grey carpet underfoot, an enveloping abstract sound around us, drawing from a hiss to a roar and back again, changing light from a central canopy, and children going crazy for fish. 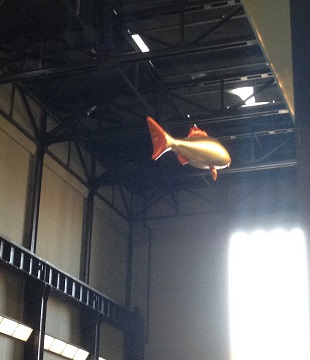 But we do not ask as much from a park. we do not ask a park to entertain. We just ask that a park provides a public space that is pleasant to be in, occasionally distracting, as in when a dog catches a Frisbee or an elderly fitness group does some yoga. And this is where the Turbine Hall comes into its own: not as a gallery, but as a public space, and that's what Parreno is trying to tell us.

Bring a book. The carpet encourages you to lie down and look up. The white panels moving up and down encourage you to see depth. The speakers occasionally play the sound of a rainstorm and then the panels move down close to the floor to shelter you. The strange shadows of the hundred of speakers hang on the wall. Children are pointing and laughing. From this strange space, we get a park and kids get a playground.